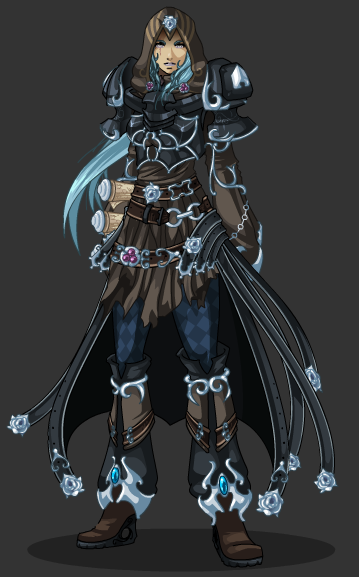 Warlic and Alexander(Xan) both fell in love with Jaania. When Warlic and Alex (Xan) decided to fight one more time, Jaania then attempted to break the two of them up, by jumping right into the middle of their crossfire, which ended in Warlic's magic-reflection spell returning Alex's ice spell into Jaania, which encased her inside a crystal for two centuries, this incident deformed the face of Alexander, who later became Xan the mad Pyromancer.

While she was frozen by a very powerful spell, both Xan and Warlic tried to free her using the very ways of magic, including the Pyronomicon's Book.

In Book 2 She was freed from the ice crystal as a way to defeat the Infernal part of Warlic, known as Wargoth the Son(considering that Wargoth is also the name of Warlic's father), the process was successful and she colaborated with The Professor, human side of Warlic, helping the Ateleans to defeat Wargoth, and stop him from destroying the whole planet. At the very end of Book 2, Jaania furiously froze both the Hero and the recently merged Warlic (as he was divided into two beings) alongside with Xan inside another ice crystal, probably for being imprisoned for so long, she saw them as a problem to her extremist goals, believing that in her viewpoint she is on the right side.

In Book 3 she is the founder of the Rose whose goal is to destroy all magic on the planet in order to achieve peace. People see her as an evil extremist while in fact she's just misguided and blinded by vengeance.

Stamina: High but can still be exhausted

Intelligence: Extremely High (Her knowledge is comparable to that of Warlic).

Weaknesses: She is too devoted to her goals, tends to ignore the fact that Akanthus and Amadeus might be manipulating her

Retrieved from "https://vsbattles.fandom.com/wiki/Jaania?oldid=5386089"
Community content is available under CC-BY-SA unless otherwise noted.