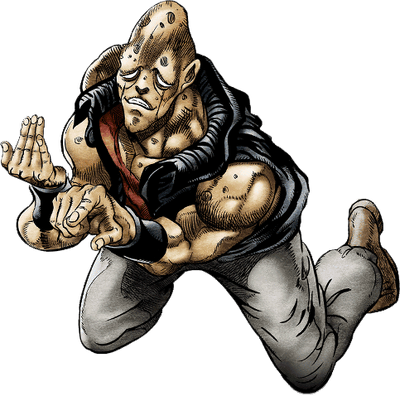 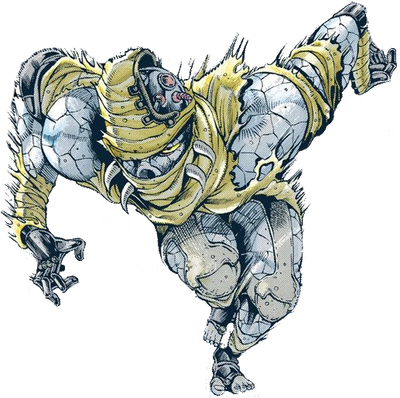 J. Geil is a minor antagonist in JoJo's Bizarre Adventure Part III: Stardust Crusaders. Known for his deformed two right hands, he is originally known as the murderer of Polnareff's sister. He is later hired by Dio Brando to kill the Joestars and allies. J. Geil uses his Stand ability alongside partner Hol Horse.

Tier: 10-B. Unknown with Hanged Man

Name: J. Geil, "Centerfold" in the English dub of the anime

Powers and Abilities: Extrasensory Perception (Capable of seeing ghosts and souls among some other supernatural forces that are normally otherwise invisible), Summoning (Of his Stand). Hanged Man has Light Manipulation (Takes the form of a beam of light when traveling), Non-Corporeality (Stands are the incorporeal manifestations of one's vital energy, and can only be harmed by other Stands), Non-Physical Interaction (Stands can interact with ghosts and other Stands), Invisibility (Stands can only be seen by other Stands and Stand Users)

Speed: Peak Human. Speed of Light travel speed with Hanged Man (Was stated to move from one source to another at the speed of light)

Weaknesses: Any damage taken to Hanged Man is reflected onto J. Geil. Hanged Man can be attacked while traveling to another reflective surface and will be forced from that surface if it is no longer reflective

Illuso (JoJo's Bizarre Adventure) Illuso's Profile (Speed was equalized and J. Geil was teaming up with Hol Horse, J. Geil was at certain distance from both)