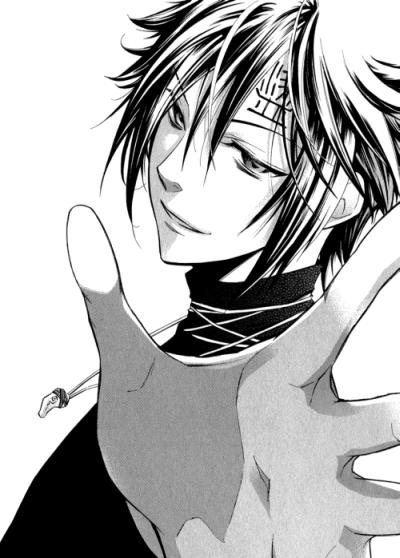 'Izuru Tomonaga' is one of the antagonists of Aphorism. Together with his childhood friend Ryou Mukai, he enrolled in Naraka to seek revenge for the death of his elder brother Satoshi Tomonaga at Naraka High School.

Izuru has spiked black hair and black eyes. His bangs are parted on the left side, revealing his character which is located above his eyebrow. He is one of the tallest characters in the series. He wears the standard Naraka High School uniform.

Range: At least tens of meters

Tomonaga's seal is the character 'tou', meaning 'steal', which allows him to steal anything, including things such as human body parts/organs. The range--how far away the thing he is trying to steal--of his powers is limited, although this range is never mentioned. He also cannot steal something from something he cannot see or does not know, as seen by him being unable to kill Rokudou, Tatsumi and Mikotogawa when they vanished from sight with the help of Katou's "Erase".

Retrieved from "https://vsbattles.fandom.com/wiki/Izuru_Tomonaga?oldid=4113495"
Community content is available under CC-BY-SA unless otherwise noted.