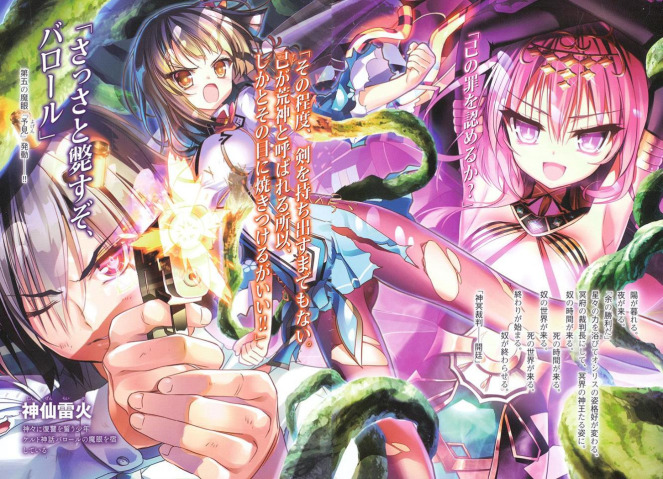 Izure Shinwa no Ragnarok is light novel written by Namekojirushi. The story follows Shinzen Raika whose sister was kidnapped, ten years ago when Gods from 7 mythologies suddenly appeared on Earth. They fought for 3 days, splitting the earth and tearing the sky in their battle. 10 years after the battle, the calamity should have been long gone already.

In order to find his sister, Raika joined the church in order to kill the Gods, and was later sent to Academy which is on an artificial island in the distant seas.

During the night, the Gods’ Proxy War was being held by using Divinity-Compatible people in order to gain the seat of the One True God.

On the first night in the Academy, Raika was attacked by a Norse mythological God called Brunhilde. Facing death in front of himself Raika acquired the detestable power of gods, the power of Absolute Domination, which dwelled within the power from the Evil Eye of Balor. Using his power, Raika tries to take back the world from Gods control. A new mythical heroic saga of a Evil Eye-user person swearing to take revenge on Gods begins now!

So far the characters are Building level and Supersonic with certain characters reaching Island level and even Planet level with their strongest attacks. The winner of the Mythical Representative War will become the One True God, the one absolute existence in the world, the pillar of the world, capable of defining anything and everything in an absolute manner, overwriting everything in the world.

Kushinada Himeko
Add a photo to this gallery

Start a Discussion Discussions about Izure Shinwa no Ragnarok