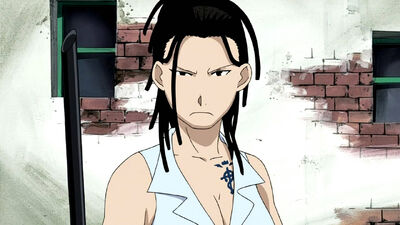 Izumi Curtis (イズミ・カーティス, Izumi Kātisu), is a master alchemist and skilled martial artist living in the southern Amestrian town of Dublith where she runs a butcher shop with her husband Sig. Though she doesn't usually take on students, Izumi accepted Edward and Alphonse Elric's plea to take them on as her apprentices and instructed them in alchemical theory and martial arts for six months. In that time, she grew to love them as deeply as she would her own children, becoming a long-term source of guidance and support for the Elrics' future endeavors.

Attack Potency: Building level (Can easily defeat Edward and Alphonse). Large Building level with alchemy (Repaired a river, and should be comparable to Edward)

Intelligence: Knowledgeable on alchemy and a skilled martial artist.

Weaknesses: Due to performing a human transmutation, her inner organs are mixed up, and she can no longer reproduce.