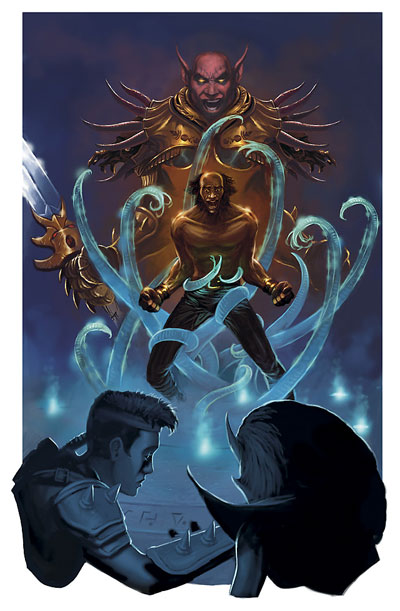 Iuz the Old, as he is known as most commonly, is the Cambion (AKA half-fiend) son of the Demon Lord Graz'zt and the witch Iggwilv, adopted daughter of Baba Yaga. Initially, he was adopted by a minor lord on Oerth. Once this lord passed on control of the land to Iuz, years of endless bloodshed occurred, during which Iuz absorbed and conquered all of his neighbors- he absorbed their souls and ascended to the rank of Demigod. His empire spread like wildfire through the use of infernal demonic armies, orcish tribes, insane cults of wizards, and mercenaries. This all came to a sudden stop when Iuz suddenly disappeared- his worshippers believed he had become a true god, and began to cast holy spells in his name.

In truth, Iuz had been captured by the forces of Greyhawk, and sealed away under their castle. After being freed by the likes of Robilar, Mordenkainen, and others, Iuz escaped once more, only to again have his plans thwarted- this time by the mage Vecna, who absorbed Iuz into his being in his quest to become a Greater Deity. And, again, Iuz escaped the humiliation, swearing vengeance on the deity.

Iuz is responsible for the initiation of the Greyhawk Wars (an event that sent Rary the Traitor into the throes of rebellion against Greyhawk) and saw years of endless violence committed after he appeared before the barbarian tribes of the North as their god, ordering them to invade his enemies. Though he enjoyed moderate success (going so far as to fracture the Shield Lands, take over the Bandit Nations, and overwhelm the forces of Furyondy), his infernal armies were banished en-masse by Canon Hazen of Veluna. Ever since, Iuz has schemed and built up his power once more.

Name: Iuz the Old, Iuz the Evil, Old Wicked, The Old One, His Most Profaned Eminence, Lord of Pain, Fiend of the North, Child of the Evil One, Master of the Dread and Awful Presences

Age: Likely in the hundreds

Powers and Abilities: Superhuman Physical Characteristics, Conceptual Manipulation (Type 2, controls the portfolio of Deceit, Pain, Oppression, and Evil, and reigns over the domains of Chaos, Evil, Mind, Trickery, and Tyranny), Abstract Existence (Type 1, as a divine creature he is purely an abstract visualization of his concept), Regeneration (Mid-Godly), Soul Manipulation, Absorption, Reactive Evolution (Absorbed the souls of his victims and ascended to demigod status, Demonic interaction rends the soul and corrupts the flesh), Subjective Reality (Significant belief forges tangible effect- proven by the fact that clerics worshiping him could draw power despite him being sealed away), Holy Manipulation, Summoning (Summoned legions of demons to fight for his empire), Pain Manipulation (His touch wracks an enemy's body with pain), Transformation (Can swap between his human form and his demon form at will), Corrosion Inducement (Exerts wave of corroding energy that saps the life from anything near him), Text Manipulation (Capable of using Symbols), Disease Manipulation, Paralysis Inducement, and Fear Manipulation (Can inflict Eyebite, which panics, sickens, and leaves the target in a state of comatose), Statistics Reduction (Can reduce a target's intelligence and willpower to that of the lowliest animal), Curse Manipulation, Statistics Amplification, Telepathy (All demon types maintain telepathy), Power Bestowal (Can grant magic power to his followers), Chaos Manipulation/Law Manipulation (Demons play into the multiversal balance of Chaos and Law; they are formed from Chaos and their mere presence raises levels of ambient chaos, thus causing chaotic effects to take place. With enough of an upset balance, entire planes of existence can be sent careening into the Abyss; Iuz in particular, as a deity-level being, presents a massive shift in the scales with his presence, causing universal changes including altering fundamental rules of the plane he is within, if no counterbalance is offered), Portal Creation and BFR (Once created a portal and forced Vecna through it), Pocket Reality Manipulation (As a Demigod comparable to the Mad Mage Zagyg, should be capable of creating demiplanes within his mind), Memory Manipulation (The insides of demons generate "blood", a black viscous material that, when it comes into contact with an enemy, induces supernatural fear and short term memory loss; as a Demon, Iuz should share this same trait), Corruption (Type 1, 2, and 3),  Immortality (Types 1, 2, 3, 4, and 8, Avatars have 6 and 9), Blood Manipulation (Blood spontaneously appears in the presence of demons, oozing from walls and filling structures), Spatial Manipulation, Time Manipulation (Mazes conjure spontaneously in the presence of Demons, buildings can possess larger insides than outsiders permit; Deity class beings possess absolute control over the space-time of their realms), Weather Manipulation (Weather is affected by the Chaotic upset of a demon's presence, causing effects such as blizzards in the middle of summer or earthquakes away from fault lines), Power Modification (Demons cause magical powers to become slightly modified in their presence, giving them a sickly, corrupted look), Death Manipulation (Plants and animals die for inexplicable reasons when in the same biome as a demon), Disease Manipulation (Creatures of good or lawful alignments may become sickened or ill at ease when in a Demon's presence), Animal Manipulation, Biological Manipulation (A demon can warp the creatures in the area into dire forms of itself, becoming stronger and meaner), Possession, Avatar Creation, Non-Corporeal (Demons become insubstantial wisps whilst attempting to possess enemies, being unable to be touched even by other spiritual creatures), Astral Projection (Demons can project freely onto the Astral Plane), Mind Manipulation (Demons possessing a foe can take over their minds), Sense Manipulation (Aside from the target's mind, a demon can hijack a target's senses), Shapeshifting (Can assume any humanoid form they please), Flight, Dimensional Travel via Plane Shift, Weapon Mastery, Social Influencing (Even seeing a Cambion is enough for a target to be charmed), Fire Manipulation via Fire Ray, Invisibility, Illusion Creation (Can create an illusory double of itself), Poison Manipulation (Carrion Crawler Brain Juice), Sound Manipulation via Silent Metal (Dampens the sounds of drawing weapons and the like), Morality Manipulation (The strikes of a Cambion are aligned with Chaos and Evil, and pierce the defenses of Lawful and Good creatures), Teleportation, Extreme Resistance to Statistics Reduction, Death Manipulation, Fire Manipulation, Acid Manipulation, Disease Manipulation, Mind Manipulation, Electricity Manipulation, Disintegration, BFR, Sleep Manipulation, Paralysis Inducement, Petrification, Transmutation, Magic, Sealing, Poison Manipulation, Soul Manipulation, Reality Warping, Subjective Reality, Holy Manipulation, Ice Manipulation

Attack Potency: Multi-Continent level (Among the most infamous cambions throughout the Planes, placing him on a pedestal similar to Acererak; as a demigod, he should be comparable to the likes of Hercules and, vicariously, the Phaethon; easily defeated Robilar, Mordenkainen, and others while he was extremely weakened; A demigod maintains such a level of power that normal mortals that they can't tell the difference between them and full gods)

Lifting Strength: Likely Class K (As a divine being, Iuz at the very least should be capable of grappling the Tarrasque)

Stamina: Infinie, as a deity Iuz is above the need for energy and can continue to act infinitely with zero outside input

Range: Universal, Multiversal with some abilities

Intelligence: At least Extraordinary Genius, despite being outwitted multiple times by the demigod Zagyg, Iuz is a talented manipulator on a global and even planar scale, having altered the religions of the Barbarians to align with his own plans, and then simultaneously beat back the armies attacking the Empire of Iuz; generally, the only reason Iuz is outsmarted and outdone is due to decades of preparation or merely a much more powerful deity 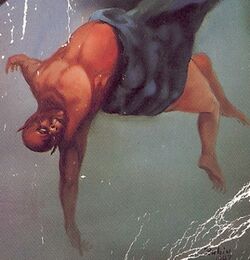 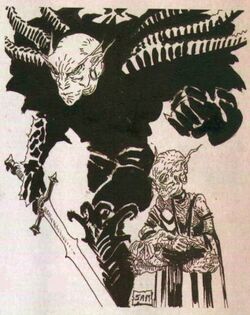 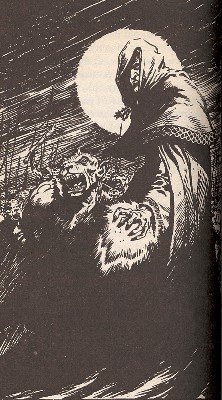 Iuz travelling with a demon 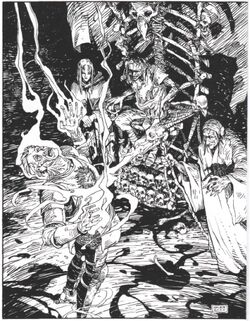 Iuz torturing a follower of Pelor along several others, including Null 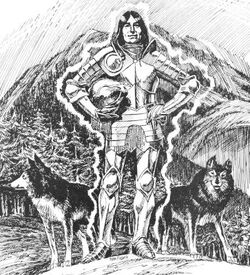 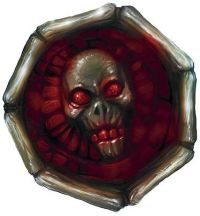 The "Unholy" Symbol of Iuz
Add a photo to this gallery

Retrieved from "https://vsbattles.fandom.com/wiki/Iuz_the_Old?oldid=5905279"
Community content is available under CC-BY-SA unless otherwise noted.