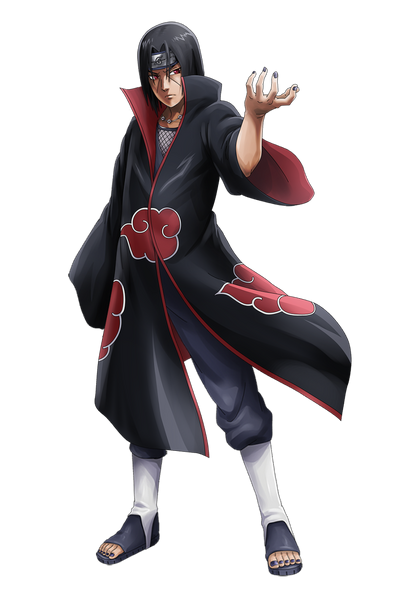 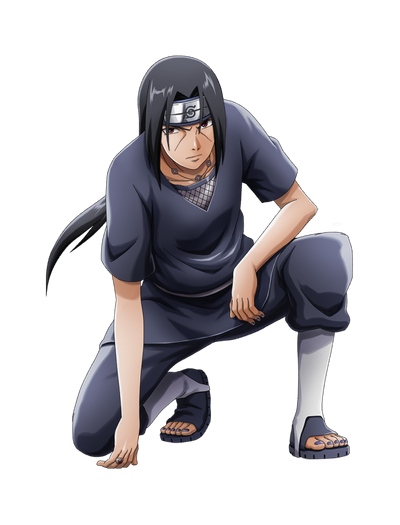 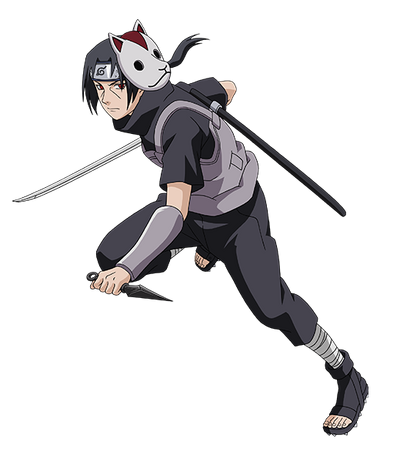 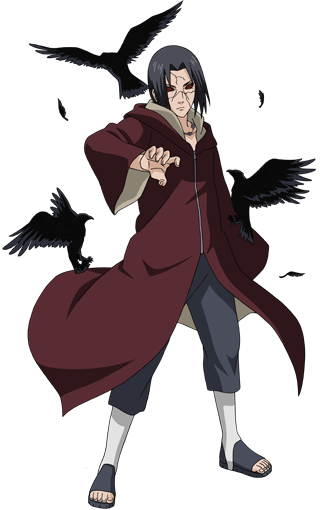 Itachi Uchiha (うちはイタチ, Uchiha Itachi) was a prodigy of Konohagakure's Uchiha clan. He became an international criminal after murdering his entire clan, sparing only his younger brother, Sasuke. He then joined the international criminal organization known as Akatsuki, whose activity brought him into frequent conflict with Konoha and its ninja — including Sasuke, who sought to avenge their family. Following his death, Itachi's motives were revealed to be more complicated than they seemed and that his actions were only ever in the interest of his brother and village, remaining a loyal shinobi of Konohagakure to the very end.

Superhuman Physical Characteristics, Genius Intelligence, Chakra Manipulation, Surface Scaling, Water Walking, Acrobatics, Skilled Hand-to-Hand Combatant, Telepathy, Breath Attack, Stealth Mastery, Shapeshifting (Can transform or replace himself into animate and inanimate objects to avoid damage), Statistics Amplification (Can enhance his physical capabilities with chakra), Weapon Mastery (Can use kunai and shuriken with perfect accuracy while blindfolded), Limited X-ray Vision (The Sharingan allows him to see chakra through solid obstacles), Enhanced Sight (The Sharingan grants him enhanced vision, the ability to give color to chakra, and allows him to keep track of fast moving objects), Analytical Prediction (The Sharingan allows him to see the image of an attacker's next move from the slightest muscle tension in their body. He can also accurately predict the opponent's move based on their personality and logical actions), Information Analysis (with sharingan can read people's energy to determine their power and their next move), Fire Manipulation (Can breathe fire and cast inextinguishable black flames called Amaterasu which can burn even fire), Duplication (Can create shadow clones that can use his techniques and act as distractions), Explosion Manipulation (Can make clones explode at will), Non-Physical Interaction with Susanoo (His Susanoo can wield Totsuka Blade which doesn't have a physical form), Barrier Creation and Weapon Creation (With Susanoo and Yata Mirror), Speed Enhancement with Shunshin, Illusion Creation, Mind Manipulation, Paralysis, Pain Manipulation, Fear Manipulation, Sleep Manipulation, and Perception Manipulation (Tsukuyomi can alter a target's sense of time drastically, along with all of their other senses. It can also destroy minds and induce mental damage and fatigue) with Sharingan Genjutsu, Illusion Reversal (Can reverse illusions cast on him), Sealing (Can seal bodies and souls with Totsuka Sword), Summoning (Can summon crows to distract his enemies), Water Manipulation, Power Mimicry (Can copy ninjutsu, genjutsu and the fighting style of his opponent), Can see camouflaged targets with the Sharingan, Reactive Evolution with Yata Mirror (It copies the properties of other attacks in order tonullify them), Power Bestowal (Transferred his ocular powers to Sasuke), Extrasensory Perception (Itachi can see The King of Hell which is said to be invisible to everyone but the person being affected by the jutsu), Resistance to Illusion Creation, Mind Manipulation and Perception Manipulation

Attack Potency: Mountain level+ (A clone with 30% of his chakra could match Kakashi. Kisame considers Itachi the stronger between them. Could fight on par with Hebi Sasuke), higher with Susano'o and Amaterasu | At least Mountain level+ (Could match KCM Naruto and Killer B), higher with Susano'o and Amaterasu (One-shoted Edo Nagato)

Intelligence: Genius. Continuously described as an outstanding genius, at the age of 7 he had the wisdom of a Hokage and had already graduated from the ninja academy even surpassing the teachers, at 8 he had mastered the Sharingan, at 10 he became a Chunin and became the leader of the Anbu at age 13. He can quickly determine the opponent’s strengths and weaknesses to shift his tactics accordingly. He also has excellent leadership skills; being able to stay composed even when fighting against Nagato, furthermore quickly determine how to fight the Rinnegan's overwhelming power. He can easily read people and effectively use this skill to predict his opponent’s actions.

Weaknesses: Itachi suffers from a deadly disease. He must use his stronger Mangekyo Sharingan abilities sparingly, and does not have an extremely high amount of chakra like other high-level shinobi. As a reanimated corpse, he might not be as strong as when he was alive.

Note: The exact strength of Amaterasu is unknown as it has been portrayed inconsistently, but it can technically harm much stronger characters. As such, claims that it can overtax the durability of comparable characters in versus threads could be considered valid.