VS Battles Wiki
Register
Don't have an account?
Sign In
Advertisement
in: Characters, Naruto, Size Users,
and 44 more 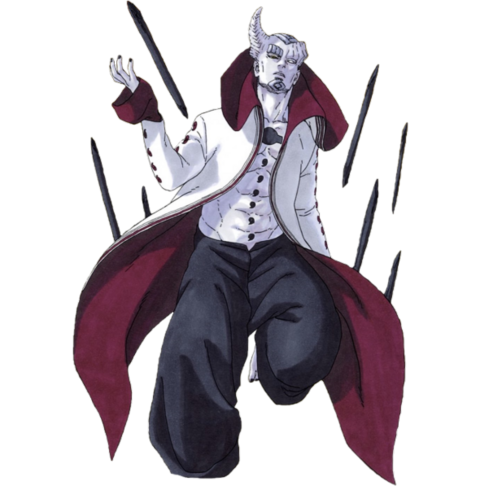 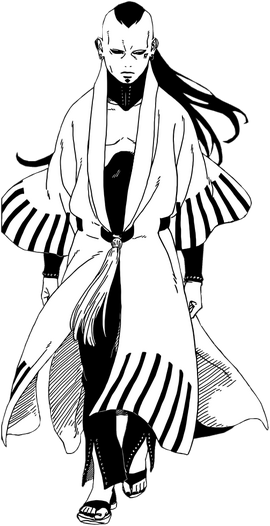 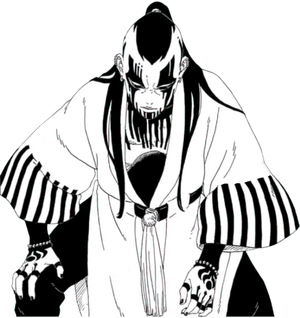 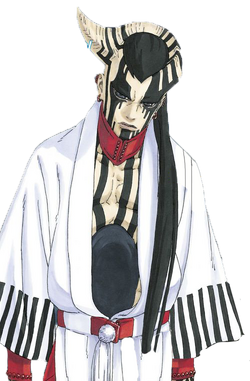 Isshiki Ōtsutsuki (大筒木イッシキ, Ōtsutsuki Isshiki) is a member of the Ōtsutsuki clan's main family and the leader of Kara pretending to be a human monk called Jigen.

Tier: Unknown, 5-C with Kāma Seal, Low 5-B in his Partial Ōtsutsuki Form | At least Low 5-B

Superhuman Physical Characteristics, Skilled Hand-to-Hand Combatant, Weapon Mastery (Skilled in Bōjutsu), Stealth Mastery, Acrobatics, Chakra Manipulation, Statistics Amplification (Can enhance his physical capabilities and speed with chakra), Surface Scaling, Water Walking, Flight, Empowerment (With Karma), Longevity (Karma has kept Jigen's body in his physical prime for over 1,000 years), Immortality (Types 4, 6 and 8 based and reliant on karma mark), Extrasensory Perception (Can easily sense the presence of Kashin Koji's toad that went unnoticed even to Naruto), Aura (As seen here) Transformation, Energy Projection, Illusion Creation (Can create illusory images of himself and alter the immediate surroundings to communicate over a long distance with genjutsu communication), Portal Creation and Dimensional Travel (With Space-Time Portal. Can create a rift in space-time, which allows anyone enveloped to transfer to a chosen location, including foreign dimensions), BFR (Sent Naruto to another dimension), Size Manipulation (With Sukunahikona he can instantly shrink himself or any non-living target to microscopic levels, and just as quickly restore its original size), Dimensional Storage, Limited Time Stop and Summoning (With Daikokuten he can send things he has shrunk to a dimension where time doesn't flow, and instantly bring them back. He has a stock of things, such as tables, food and drinks), Weapon Creation (Can create black rods that can be formed directly from his hand, through the floor or around his neck. These rods can also be used as a Bō), Paralysis Inducement and Energy Absorption (Can drain energy, paralyze and restrict the movements of targets with his black rods), Limited Telekinesis (Can telekinetically control his black rods), Absorption (Can absorb techniques and chakra of others with Karma), Attack Reflection (Can return any attack he absorbs back amplified), Power Bestowal (Gave Kawaki his Karma, that gives him access to some of his powers), can bypass durability to an extent by creating rods in the body of opponents, Sealing (Can seal people within a gigantic sealing coffin), Resistance to Ice Manipulation (Possesses better chakra control than Kakashi), and Extreme Heat (Unaffected by Sasuke's amaterasu)

All previous abilities amped, Enhanced Senses (Byakugan allows him to see long distances and tiny objects, has an almost perfect 360° field of vision, can see through visual obstructions and his opponents' internal chakra systems), Limited Durability Negation (The Gentle Fist bypasses durability to an extent as it directly targets the nerves and life energy channels to disrupt the target's movements and ability to control their inner energy), Biological Manipulation and Body Control (Controlled Jigen's brain and took over his body like a parasite), Unconventional Attack Reflection, Power Nullification, Dimensional Travel and limited Time Stop (Via Sukunahikona and Daikouten can shrink non-living objects and attacks within his eyesight making them useless and if he wishes teleports them to a time stopped dimension and use said attacks or objects whenever he wants), Possession over time via limited Data Manipulation (can convert himself into data to form a mark on a target allowing him to possess them), Summoning (Can summon black cubes), Telekinesis (He can freely control the black cubes telekinetically. Additionally, he deflected some Shuriken with Telekinesis), and Extrasensory Perception Manipulation (His black cubes can block out sensory abilities of Naruto and Kurama's caliber)

Attack Potency: Unknown (Kicked Base Naruto[1]), at least Moon level+ with Karma Seal (Kicked Naruto so hard[2] that made him comment about his incredible strength[2]. Matches Six Paths Sage Mode Naruto[2]), at least Moon level+, far higher with Partial Ōtsutsuki Form (Broke Sasuke's Perfect Susano'o defense with one kick[3]. Penetrated Kurama's defense[3] and was able to hit Naruto. No sold a punch from SPSM Naruto and kicked him[3] so hard he went from SPSM to base[3], and Naruto and Sasuke were both going all out[3]. There's no sliver of chance of Naruto defeating Jigen[4]) | At least Moon level+, likely Small Planet level (Completely different level of power from before[5]. His body is brimming with incredible power[6]. Kicked Six Paths Sage Mode Naruto[7], took him by surprise and kicked him again[8], and stomped him[9] and elbows Sasuke[10]. Constantly overpowered both of them. Should be stronger than the Majestic Attire: Susano'o, since there was no possibility of Naruto and Sasuke - even together - to defeat him)

Speed: At least Relativistic (Should be comparable to base Naruto), at least FTL with Karma Seal (Can react to and block[2] Sasuke's attacks. Dodges Six Paths Sage Mode Naruto's kick[2] and his other attack, while immediately blocking Sasuke's attack[2]), at least FTL, far higher with Partial Ōtsutsuki Form (Easily dodged Sasuke's Perfect Susano'o attack[3] and dodged all of Kurama's attacks[3]. His rod attacks are too fast even for Sasuke with his Sharingan)

Lifting Strength: Unknown, at least Class T with Karma Seal (Struggles with Naruto and Sasuke a lot of times), at least Class T, far higher with Partial Ōtsutsuki Form (Much stronger than before)

Striking Strength: Unknown, at least Moon Class+ (Much stronger than both Six Paths Sage Mode Naruto and Rinnegan Sasuke physically, as he constantly overpowered both of them, and even made them compliment his strength), at least Moon Class+, likely Small Planet Class with Partial Ōtsutsuki Form (Much stronger than before. Overpowered both Kurama Avatar and Perfect Susano'o)

Stamina: Very high (Fought with Naruto and Sasuke in a prolonged fight after teleporting into another dimension) | Very high | Extremely high

Range: Standard melee range with Taijutsu, Dozens of meters with his black rods

Intelligence: Gifted. He is the leader of the secret society called Kara, an extremely intuitive and skilled leader, manipulator, and deceiver, even deceiving Kashin Koji, an exceptional ninja who is also a clone of Jiraiya. He proved himself capable of detecting ruses and lapses of loyalty in his members, even the likes of genius-level intellectuals like Victor. He is also extremely experienced, having lived for thousands of years while devouring planets and evolving continuously, and also lived for centuries on planet Earth while possessing Jigen. 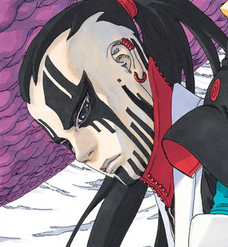 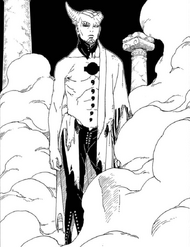