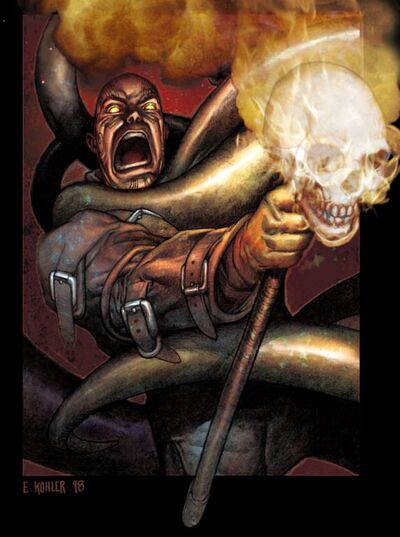 Ishmael (last name unknown) is a supporting character from the Blood franchise, briefly appearing in the first game before returning to play a more major role in Blood II: The Chosen. Originally a circus performer prior to joining the Cabal, Ishmael's calling came in the form of Tchernobog himself, who appeared to him in a picture in his dressing room bearing a message. The dark god's was an offer, an instruction to kill the circus staff and come to his side. Having engaged in cult work in the past, an induction into the ranks of the Cabal was natural to him, and soon enough he found himself rising to become one of the Chosen, Tchernobog's elite generals.

More than a hundred years after he and the rest of the Chosen were betrayed by Tchernobog and killed by his servants, Ishmael was resurrected and called forth during a faulty attempt to kill Caleb with the Singularity Generator. For reasons unknown, he appears to be the only one truly aware of the nature of what's going on, and he explains to Caleb the reasons behind the weakening of the universe's dimensional threads and the recent encroachment of the Ancient One.

Powers and Abilities: Superhuman Physical Characteristics, Magic, Weapon Mastery, Immortality (Type 1 and 7), Healing (Mid-Low with Med-Kits and magic, as well as by consuming the hearts of humans), Teleportation, Pyrokinesis, Energy Manipulation (Can generate shockwaves of energy), Forcefield Creation (Can project magic shields), Absorption, Fire Manipulation, Energy Manipulation and Soul Manipulation with the Life Leech (Fires blasts of flame and magic energy which drain the victim's life-force and deal Spirit damage.), Death Manipulation, Distance Negation and Armor Negation with Voodoo Dolls (Ignores distance and armor with its attacks. Waving a hand across one of the dolls instantly kills a target and severely harms those nearby), Portal Creation and Chain Manipulation (via the Flayer), Homing Attack (via the Orb), Clairvoyance (via the All-Seeing Eye), Statistics Amplification (via Wards and the Life Seed), natural Resistance to Soul Manipulation (Scaling from Caleb)

Attack Potency: Multi-City Block level physically (Should be comparable if not superior to the Beasts who were meant to serve as new members of the Chosen. Implied to have fought and killed numerous creatures from the Ancient One's reality, which most likely included several Behemoths), higher with weapons and magic. Voodoo Dolls and the Life Leech can ignore conventional durability.

Speed: Supersonic combat speed and reactions (Capable of reacting to and dodging Tesla Cannon projectiles which, at the very least, should travel at this speed. Able to land hits on enemies who can also react to such projectiles.)

Lifting Strength: At least Class 1 (Should be at least somewhat comparable to Caleb and Gabriella)

Range: Standard melee range physically. A few meters with energy shockwaves. Dozens to hundreds of meters with weapons and magic. Functionally unlimited with Voodoo Dolls. (limited only by eyesight)

Intelligence: High. Considered the most intelligent member of the Chosen, and was able to quickly deduce the nature of the problems surrounding Caleb shortly after being resurrected and summoned by the Singularity Generator. Said to possess a broad understanding of magic, with his knowledge of the dark arts surpassing that of every other member of the Chosen. Is stated to be capable of countering almost any attack during a fight.

Weaknesses: Reliant on his magic in battle to the point that his other skills have "atrophied" as a result. Using the Life Leech while it's devoid of trapped souls will cause it to drain his own soul as compensation.

Note: As Ishmael was not a playable character in the first game, his abilities and equipment are limited to what he has been shown possessing in the second installment.