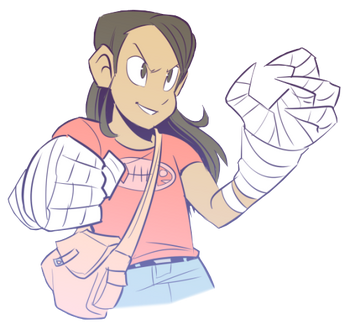 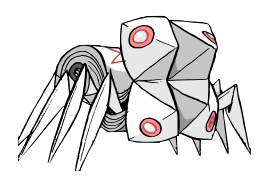 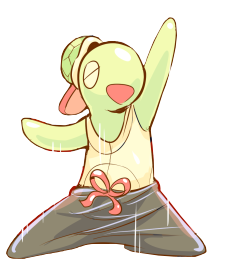 Isabel Guerra is a student at Mayview and a member of its mysterious Activity Club, a group of student dedicated to fighting hostile paranormal threats to the city and themselves. She is one of the best fighters in the club, casually taking out spirits much larger than her in size and dealing with opponents with supernatural powers. Her father is Francisco Guerra, who is responsible for the training of spectrals in combat against both the normal and paranormal.

Powers and Abilities: Superhuman Physical Characteristics, Aura, Ectoplasm Manipulation, Can interact with and see normally non-corporeal/invisible ghosts/spirits[1], Martial Arts (Trained by her father in a martial art that combines spectral energy attacks with physical blow[2]s), Paper Manipulation with Eightfold (Can fill large parts of a room with paper[3], as well as shape it into tools, weapons, and shields[4]), Limited Telekinesis/Teleportation with Flipflop (Has the ability to 'flip' things vertically and horizontally[5]), Can enter a state of heightened perception and speed[6] which allows her to create afterimages

Attack Potency: At least Wall level (Fought alongside Max against spirits that could harm him[7]. Competed with spirits much larger than her in size[8], and is one of the more powerful students in the Activity Club) likely higher (Was able to defeat a possessed Richard Spender[9], although this was done mostly in part with help from Isaac)

Speed: Subsonic (Comparable to Mr. Garcia, who reacted to Isaac's electrical attacks), Massively Hypersonic while in spirit trance (Is a state of heightened perception, where the world appears to be motionless around her. Spender could react to Isaac's Lightning within it[10])

Lifting Strength: Superhuman (Knocked a large spirit flying in the air vertically with a push[11])

Durability: At least Wall level (Took blows from spirits much larger than her. She fought alongside Dimitri, who redirected a dodge-ball through by Hijack[12]), likely higher (Somewhat dealt with casual hits from Hijack while he was possessing Spender)

Stamina: Above Average. Fought against the Pixel Cat spirits for a decent amount of time without getting tired

Range: Several meters with most spectral energy attacks and her flipping and paper manipulation, several dozen meters with Spec Shots

Intelligence: Average for a middle school student, although she is versed in martial arts and combating spirits