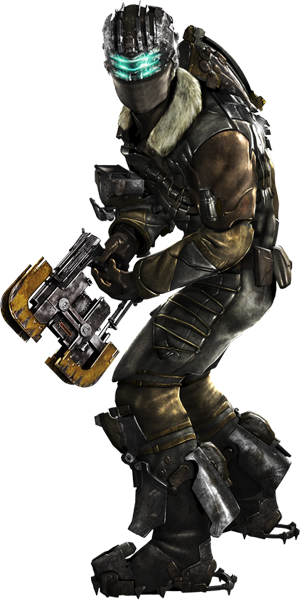 Isaac Clarke is a systems engineer working for the Concordance Extraction Corporation (C.E.C.). He volunteered to be part of an emergency response unit of the USG Kellion, sent to investigate the USG Ishimura. In which they discover every crew member dead and turned into Necromorphs. Apparently the sole survivor of the incident, Isaac became stranded in space for a long period of time before he was rescued by an Earth Government ship. Three years later, Isaac was held in an asylum on Titan Station and was diagnosed dementia that result in haunting illusions that taunt, terrify, and even try to kill him. Later down the line, he's forced back into action by captain Robert Norton and sergeant John Carver to aid them in destroying the source of all the markers in the known universe.

Powers and Abilities: Superhuman Physical Characteristics, Flight, Weapon Mastery, Telekinesis, Time Manipulation (Stasis creates a temporary time dilation, which slows down organic and non-organic objects), Auto-Healing (It is revealed that the RIG has an advanced auto-delivery [AutoMed] system that works in sync with the RIG's health monitor to assess damage done to an area and automatically apply the gel to the selected area.), Energy Projection (Weapons like the Plasma Cutter and Line Gun fire thin beams of energy), Fire Manipulation (Flamethrower unleashes a stream of fire and it's alternate fire mode launches the fuel canister at targets, exploding in a ball of fire), Vibration Manipulation (Force Gun fires a short range shockwave of kinetic energy), Electricity Manipulation, Explosion Manipulation (The Javelin Gun's alternate fire causes the javelin's to release a stream of electricity and explode), Resistance to Cold and Hot temperatures (via Arctic Survival suit and Archaeologist suit respectively), Radiation Manipulation (His suit protected him from the highly radioactive orbs from the USS Valer's weapons)

Speed: At least Normal Human while on foot, at least Subsonic while using his RIG's thrusters in Zero-G (Slightly faster than a Bullet Train in the future), Subsonic+ reactions (Can react to powerful weapons and even gunfire to some extent, react to Twitcher)

Lifting Strength: Superhuman (Can rip a Necromorph's heads off)

Striking Strength: Wall Class (Can easily compete with monsters up close that can cut through metal and bulldoze through walls and steel, can easily crush body parts)

Durability: At least Wall Level without armour, at least Large Building level with armor (Can take blows from Skyscraper-sized Necromorphs & survived a fall from high in the atmosphere), probably much higher (Survived a moon crashing into the planet from viewing distance, but whether this is an actual feat or an outlier is debatable)

Stamina: Superhuman, fought through 3 different Necromorph outbreaks for almost 24 hours each without taking a break during each one

Intelligence: Isaac Clarke is very Intelligent and extremely resourceful. As a CEC Engineer he able to hack, repair and dismantle technological machines. An example of this is when he dismantled a Kinesis Therapy machine box and removed its Kinesis Module for his own uses, same with a Stasis Module. Also, he was able to improvise the creation of a Plasma Cutter using a flashlight and a surgical module when he tried to help a survivor

Weaknesses: During the events of the second game he was frequently prone to very vivid hallucinations that almost got himself killed & even one of them almost caused him to stab himself in the eye, but he has since rid himself of this problem.