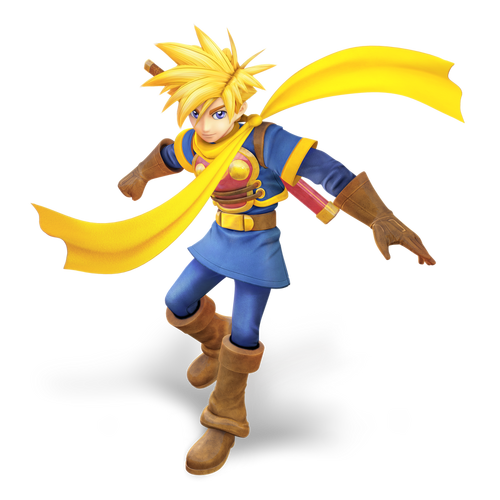 Isaac is the main protagonist of the first Golden Sun game. He lives in Vale, where his childhood friends, Garet and Jenna, reside. One day, a terrible storm appeared in the village (which was caused by Saturos and Menardi by accident), and resulted in the death of Isaac's father and Jenna's family. Three years later, he traveled up Mt. Aleph, where the source of Alchemy resides with his friends and Mr. Kraden. While exploring the mountain, they come across an ancient room where the 4 elemental stars reside. Saturos, Menardi, and Jenna's supposedly deceased brother Felix followed them to the mountain, forcing them to hand over the elemental stars with the exception of the Mars Star. With Garet at his side, Isaac travels across the world of Weyard to save Jenna, and stop the evil Mars Adepts from activating the forbidden power of Alchemy. Credit to Nibroc-Rock for the Isaac render.

Speed: Massively FTL+ (Superior to Iris, who can fly at this speed)

Lifting Strength: Unknown. Class 5 with Psynergy (Can lift boulders with his Psynergy)

Intelligence: Gifted. Isaac Is an excellent puzzle solver, fighter, combat strategist, and has trained in both Psynergy and Alchemy since childhood. He was also a student of Kraden, who is one of the wisest and most knowledgeable scholars in all of Weyard.

Weaknesses: Djinn need to be reset after being used, or given time to recover entirely after summons are used. While in these states, the Djinn don't give the adept boosts and need to be managed carefully 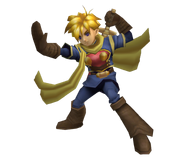 Isaac as he appears in Super Smash Bros. Brawl. 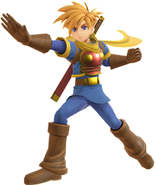 Isaac as he appears in Super Smash Bros. Ultimate.
Add a photo to this gallery