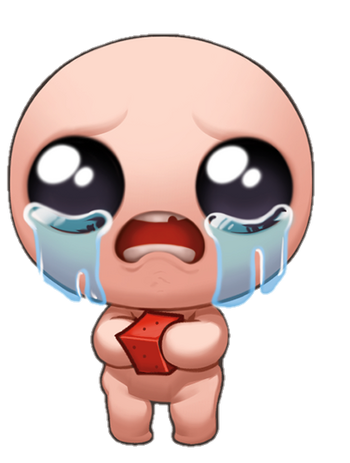 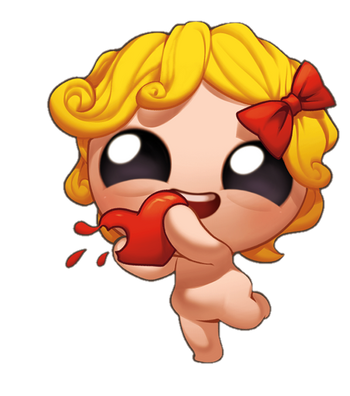 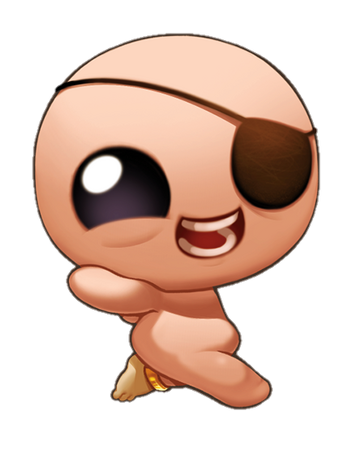 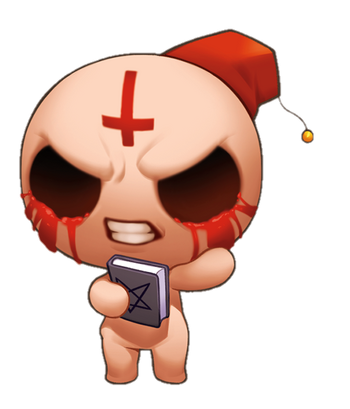 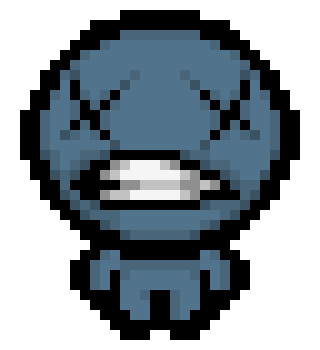 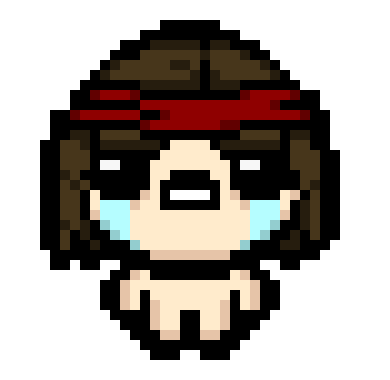 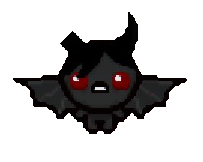 Isaac is the main character of the series, reappearing from the original Binding of Isaac. Isaac is the first playable character, being unlocked at the start of the game. Isaac starts with three heart containers and one bomb by default. Once unlocked, he also starts with The D6.

Superhuman Physical Characteristics, Tear Manipulation (Can fire waves of tear projectiles which damage anything upon touching it), Weapon Mastery (Capable of using tears, swords, and knives efficiently), Matter Manipulation (With D-6, it can change items into different items), Danmaku, Self-Sustenance (Types 1 and 2), Healing (with Yum Heart), Flight, Blood Manipulation (Is capable of firing blood tears with the Razor's Blade and drop hazardous blood with anemic), Energy Projection (Can fire a short-ranged energy beam of brimstone), Resurrection (As Lazarus, can resurrect once instantly after dying), Statistics Amplification (With Book of Belial which increases his strength and lets him fire blood tears), Immortality (Types 2 and 7; Is capable of surviving dozens of impalements and injuries from items without being affected), Forcefield Creation (With Holy Mantle which creates a forcefield around himself which is capable of blocking attacks and regenerates between rooms), Astral Projection (The Forgotten can separate his soul from his body), Supernatural Luck (Cain's Lucky Foot increases his luck, making it more likely that random effects will happen in his favor and be able to win at gambling more), Explosion Manipulation (Has access to explosives such as bombs), Empowerment (Gets significantly stronger and faster when at low health and deals more damage the more times he takes damage), Animal Manipulation (Controls a dead bird, which attacks opponents whenever Isaac is damaged), Summoning (Can summon a demonic familiar the more times he's damaged), Duplication (Can duplicate his familiars with the Box of Friends), Creation (Can create coins and poop), Void Manipulation and Absorption (Can absorb items into the Void, allowing for the use of their effects repeatedly), Teleportation (Can teleport back to the first room of the floor with the Fool card), Light Manipulation, and Homing Attack

Homing Attack (Due to items like Spoonbender and Godhead, all of his tears and lasers home onto opponents), Animal Manipulation (Has control over flies and spiders and can make them even stronger), Summoning (Can summon Mom, beggers, ghosts, and other beings), Holy Manipulation (Can shoot holy light and tears and become holy with the Bible), Reality Warping and Data Manipulation (via Dataminer which warps and distorts rooms around Isaac), Petrification (Can turn enemies into gold with his tears and touch and can petrify enemies with Mom's Contact), Status Effect Inducement (Using various items, he's capable of inflicting a variety of status effects onto the opponent), Time Manipulation (Can completely stop time, turn it back and passively slow down time), Intangible Attacks (His tears can phase through walls and obstacles), Energy Manipulation, Natural Weaponry, Disease Manipulation (Can poison enemies with the Common Cold and cause a contagious outbreak with Contagion), Invulnerability (Can become temporarily invincible with items such as the Unicorn Stump and Unicorn Horn and various others), Ice Manipulation (With Mom's Contacts, Isaac has 20% chances of freezing his enemies), Darkness Manipulation (Can control shadow animals and control shadows), Animated Shadow (Has an animated shadow that follows him around with a one second delay), Black Hole Creation (Can create small black holes which suck opponents in and damage them), Size Manipulation (Can change his size with various items and pills and can shrink his opponents with his tears), Camouflage (Is capable of blending into the background making it so enemies can't detect him), Transformation (Can transform into a variety of transformations via picking up different items or transform into a different character with the clicker), Poison Manipulation (Various items grant him poisonous tears which poison on contact, passively deals massive poison damage to anything near him), Enhanced Explosion Manipulation (Can fire bombs, missiles, and explosive tears via various items), Magnetism Manipulation (Passively attracts items towards him and can drag enemies towards his tears via magnetism), Fire Manipulation (Can shoot tears made of fires as well as red and blue fire), Death Manipulation (The Chaos Card will kill an enemy no matter what, can even kill opponents immune to Isaac's tears), Electricity Manipulation (Capable of firing electric lasers and his tears also emit electricity), Acid Manipulation (Some of his tears are acidic and capable of breaking down even solid rock), Empathic Manipulation (Can cause opponents to be charmed and friendly towards him), Fear Manipulation (Can cause enemies to be scared and run away from him with various items), Limited Earth Manipulation (Is capable of creating and making rocks spike out of the ground with various items), Mind Manipulation (Can cause enemies to become confused with his tears), Transmutation (Can turn enemies to gold with his tears and his touch, Can turn enemies to poop), Teleportation (via various items, however he does not have control where he will be teleported), Telekinesis (Can telekinetically control his tears with the Ludovico Technique), Light Manipulation (Passively emits a light-in front of him which slows down enemies, his tears are capable of summoning holy light), Statistics Reduction (Capable of reducing the speed of the opponent), Power Mimicry (Multiple familiars are capable of mimicking his tears, can mimic the effects of cards and pills with the Blank Card and Placebo), Duplication (Can duplicate coins and items), Regeneration (Low; Can slowly regenerate damage via the Placenta), Empowerment (Gets stronger when under a variety of conditions such as never missing), Blessed (Is blessed by Eden which grants him a random item to use in a different run), Sealing (Can seal enemies in a Friendly Ball), Portal Creation (Is capable of making portals from room to room with the Ventricle Razor), Attack Reflection (Can reflect and redirect attacks with items like the Soul), Information Analysis (Can analyze the opponent's health with Spider-Mod), Aura (Has an aura which boosts his stats and poisons enemies who come nearby. His familiars have auras which multiply his damage and increase his fire speed), Bone Manipulation (Can fire bone tears with Compound Fracture), Damage Reduction (Can block damage and completely negate it), Necromancy (Can rise skeletons from the dead with Book of the Dead), Resistance to: Curses (which includes Teleportation, Memory Manipulation, Darkness Manipulation, and Perception Manipulation) and Explosions (Completely unaffected by explosions as they even heal him)

Attack Potency: Small Building level (His tears are able to harm and kill Mega Satan even without a damage upgrade item) | At least Small Building level, likely far higher (Absolutely dwarfs his base self and Mega Satan in power, sheer volume of fire is capable of putting him much higher), can ignore durability with many abilities and Chaos Card

Range: Tens of meters, Hundreds of meters with Mama Mega

Key: By Himself and with Standard Equipment | With Every Item 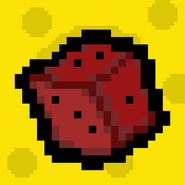 Isaac dreaming
Add a photo to this gallery

Spelunky Guy (Spelunky) Spelunky's Profile (Speed was equalized, both were inside of the Cave of Olmec)

Frisk (Undertale) Frisk's Profile (Frisk had Low-High Determination and Isaac had every item. Speed was equalized)

Start a Discussion Discussions about Isaac (Binding of Isaac)