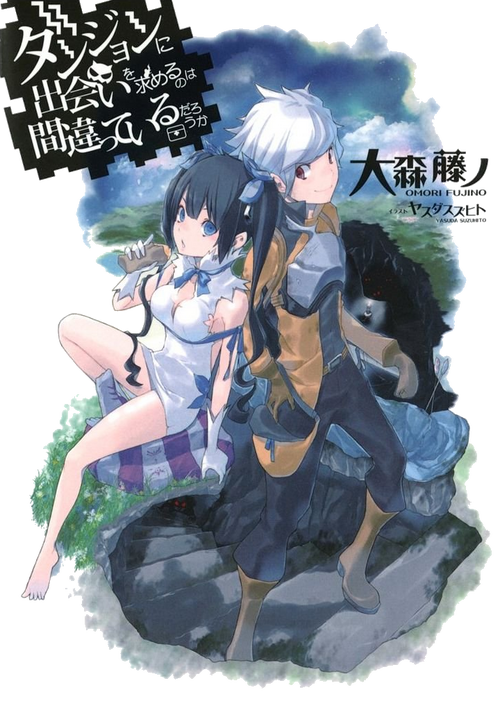 Tired of the stagnant and everlasting nature of Heaven, the gods and goddesses descended upon the world of mortals in search of excitement and change. With their descent came the rise of the Dungeon, a spiraling skyward tower that served as an entrance to a seemingly endless abyss filled with monsters, danger, treasure, and adventures to be had. Seeing the awestruck mortals as the ultimate source of entertainment, the gods granted those intrepid enough to brave the Dungeon abilities far beyond their ken with a blessing known as Falna. In exchange, these mortals, now known as Adventurers, swear fealty to the god who took them in, becoming their children and thus part of the god's Familia. Thus the Age of Adventurers began.

Enter Bell Cranel, a rookie Adventurer and the sole member of the down-on-its-luck Hestia Familia. This young lad became an Adventurer for one reason and one reason only: to find and rescue a damsel in distress and fulfill his dreams of an ideal romance. But in an unlikely series of events, the boy ended up being on the receiving end of this fantasy of his, courtesy of the legendary Sword Princess, Aiz Wallenstein. Fleeing out of embarrassment and longing, Bell finds himself instantly smitten with the girl who saved his life, resolving to grow strong enough to stand by her side. But Bell could never have imagined the kinds of consequences his childish dream would have...

Dungeon ni Deai o Motomeru no wa Machigatteiru Darō ka? (most frequently abbreviated as simply Danmachi and localized as Is It Wrong to Try to Pick Up Girls in a Dungeon) is fairly lacking in raw power. Weaker Adventurers rarely average above Wall level or Small Building level, while the strongest Adventurers' best feats top out around Large Building level. While their skills are varied, the series is also rather lacking in hax abilities amongst Adventurers, but the Gods have some notably useful abilities.

Start a Discussion Discussions about Is It Wrong to Try to Pick Up Girls in a Dungeon?