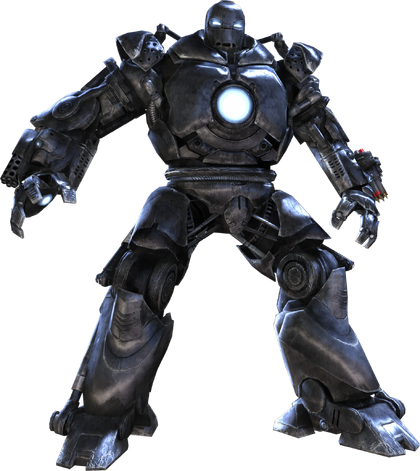 Obadiah Stane was the business partner of Tony Stark and a good friend of his father, Howard Stark. After Howard's death, Stane became interim CEO of Stark Industries until Tony took over officially shortly after. Stane's jealousy of the younger Stark led him to join forces with the Ten Rings to organize a failed attempt to assassinate him so Stane could become CEO once again. When this failed, Stane created the Iron Monger Armor and attempted to kill Stark himself, leading to his own death.

Attack Potency: Large Building level (Can easily damage and overpower Iron Man Mark 3, and is powered by the same Arc Reactor as the Mark 3)

Speed: Hypersonic flight speed with Massively Hypersonic+ combat speed and reactions (Flew at these speeds, and then eventually caught up to Iron Man. Reached freezing temperatures in seconds)

Intelligence: At least Above Average (Head of the Weapons Division at Stark Industries. Oversaw the creation of his own armor, and is an accomplished businessman)

Weaknesses: Suffers the same issues as the Mark 2 armor: fatal ice buildup if it approached altitudes exceeding 40,000 feet, resulting in the main transducer feeling sluggish at said altitudes and the hull pressurization becoming problematic, causing the entire armor and its systems to freeze up. Targeting system can be destroyed, highly reducing weapon accuracy.