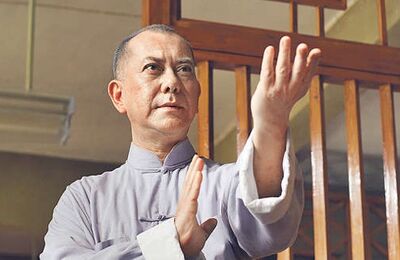 In 1949, Ip Man, who has been suffering from chronic gastric pain, travels alone to Hong Kong. He starts by teaching Wing Chun on the rooftop of a building that houses a hotel staff's general association. He meets and accepts new students, including Tang Shing, Leung Sheung, Wong Tung, Lee King, and Chan Sei-mui. During that period of time, Ip Man's wife, Cheung Wing-sing, also comes to Hong Kong to join her husband, but returns to Foshan shortly after because life in Hong Kong is hard. The couple never saw each other again because Cheung died not long after returning to Foshan. His son Ip Chun comes from Foshan to Hong Kong to join him.

Attack Potency: Street level (Fought White Crane Style Master Ng Chung to a standstill, handily defeated Master Ngai [who was equipped with needles on his arms], kicked one of Local Dragon's thugs a few meters away , defeated the Local Dragon)

Lifting Strength: Peak Human (Able to briefly lift and push up a giant sign that busted through a wall when it fell in his direction)

Durability: Street level (Took blows from the Local Dragon, despite his age)

Intelligence: Above Average, possibly higher (Skilled in and has experience with martial arts)

Retrieved from "https://vsbattles.fandom.com/wiki/Ip_Man_(Anthony_Wong)?oldid=5399317"
Community content is available under CC-BY-SA unless otherwise noted.