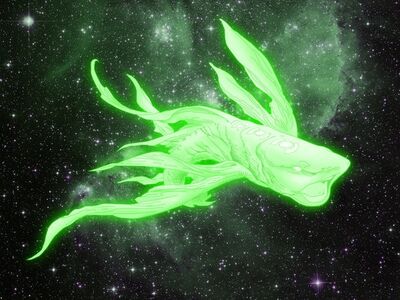 Ion is the symbiotic Willpower entity birthed from the green part of the Emotional Spectrum, contrasting and opposing Parallax, the yellow entity of Fear. It inhabited the central Green Lantern Power Battery on Oa, it's existence being kept secret from the rests of the Corps, where it would prevent Parallax from escaping. Only after the Central Battery's destruction, were both Ion and Parallax set free.

After the revelation of it's existence, two Green Lanterns played host to the immensely powerful entity, namely Kyle Rainer and Sodam Yat, both inhabited at a time of great desperation for it's help.

Age: Unknown, possibly as old as the concept of Willpower

Classification: Conceptual being, Embodiment of Willpower

Powers and Abilities: Superhuman Physical Characteristics, Spaceflight, Possession (Capable of possessing hosts), Mind Manipulation (Even though benevolent, like other Emotional Spectrum manifestations, he should be capable of affecting his host's mind), Energy Manipulation and Absorption, Abstract Existence (Type 2), Non-Corporeal, Willpower Manipulation, Immortality (Type 1, 6 and 8), Conceptual Manipulation (Type 4. Embodies the concept of Willpower throughout the Universe)

Attack Potency: Low Multiverse level (Empowered Sodam Yat to the point where he capable of going toe-to-toe with Superboy-Prime)

Speed: Likely Massively FTL+ (Allowed Sodam Yat to fight on par with Superboy-Prime, who is this fast)

Durability: Low Multiverse level (As the very embodiment of the concept of Willpower, Ion should be incapable of being killed by conventional means)

Weaknesses: Presumably, much like his counterpart, he weakens should his host receive bodily damage

Retrieved from "https://vsbattles.fandom.com/wiki/Ion?oldid=5484801"
Community content is available under CC-BY-SA unless otherwise noted.