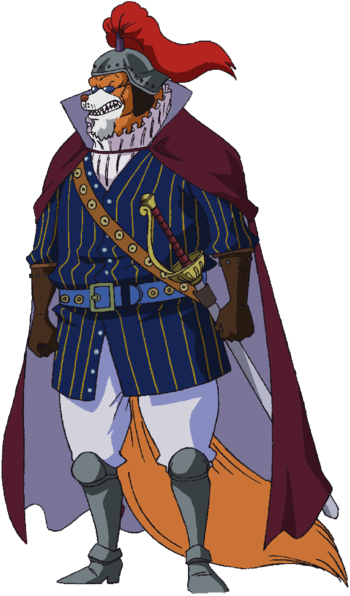 Duke Inuarashi is a canine mink and one of the two rulers of the Mokomo Dukedom, dubbed the "Ruler of Day" as he rules over the Mokomo Dukedom from 6:00 AM to 6:00 PM. He and Nekomamushi serve as retainers for the Kozuki Family of Wano Kingdom.

While he is currently holding a strong grudge against Nekomamushi for currently vague reasons, both of them were once partners who rode on Whitebeard and Gol D. Roger's ships as pirates while serving under Kozuki Oden (Momonosuke's father). They did not reach Raftel and instead reside on Zou. Nekomamushi and Inuarashi's grudge means much less to them than serving Momonosuke as shown when they stopped their enraged fighting in order to give news on the well-being of Raizou.

After fighting Jack and his crew for 5 days Inuarashi was tortured to the point in which he lost one of his legs. He withstood the pain in which he and his country men endured in order to conceal the whereabouts of Raizou, who had been hiding in the country at the time.

Tier: At least 7-A, Possibly higher

Attack Potency: At least Mountain level, possibly higher (Held Jack off in combat for 12 hour intervals while also being able to contend his mammoth form on one occasion)

Speed: At least Massively Hypersonic+, possibly Relativistic+ (Should be as fast as Nekomamushi and Jack)

Stamina: Very High (Could hold a physically demanding brawl against an opponent for 12 hour intervals without showing fatigue)

Range: Extended melee range due to size, a few meters with his rapier

Intelligence: High (While he holds a strong grudge against Nekomamushi, Inuarashi is capable of ruling Zou, and his will power allowed him to withstand intense levels of torture that led to him losing a leg without revealing information about Raizou, who he was concealing the presence of at the time)