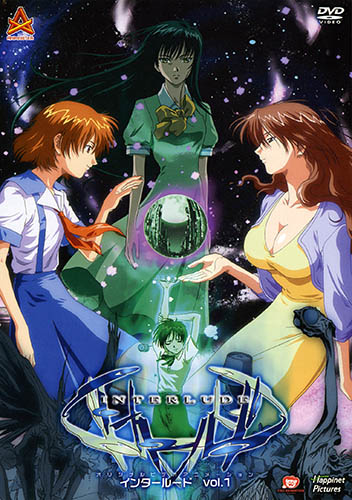 Interlude (インタールード Intārūdo?) is an anime and visual novel by Longshot told in parallel novel style that follows the events around three women. Interlude was originally released for the Sega Dreamcast on March 13, 2003, a rare occurrence for visual novels, as most are released for the PC first. PlayStation 2 and PC ports were later also released. The PS2 version received a 'The Best' budget price re-release on March 1, 2007.

For a close-knit foursome of high school friends, life is all about sleeping in class, strawberry milk, and after-class karaoke. However, our unnamed main protagonist is troubled by nightmares of death and disaster. Only when he begins to realize that his memories of people and events are different from those of Tamaki Maiko (named "Tama-chan" by her friends, "Mai-chan" by herself), Chimu and Harusa, his three female friends, does he begin to wonder. Later, when the waking dreams start... a short moment of him seeing something that no one else sees... an attractive young lady, who stares back at him in amazement from an empty subway station, does he begin to wonder about his sanity. That evening, the four encounter and follow a shadow with no person, only to encounter a gang of stumbling zombies. And then he wakes up that morning from yet another bad dream, but the threads of reality have become a bit too frayed, and he begins to see a way in which he can travel over to the reality of his nightmares.