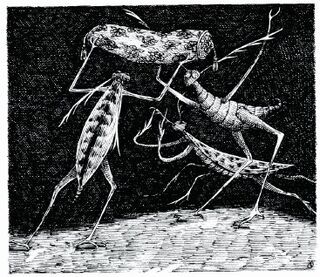 The Insect worshippers are the Main-Antagonist of the 1963 book 'The Insect God' by Edward Gorey. They seem to have a similar appearance to the Insect God and they cause individuals to go insane when they are near. At the end of the story, the insects finish their task and sacrifice their victim to the Insect God.

Powers and Abilities: Superhuman Physical Characteristics, Reality Warping, Madness Manipulation (Type 3.Caused a human to go insane only by causing noise, can cause someone to become askew although through unknown means.), Teleportation, Probability Manipulation (They were able to manipulate the actions of people, such as not being able to gather attention from the citizens of a town), Possible Adhesive Manipulation, Light Manipulation and Sound Manipulation (The Walls of the 'endless' structure is considered slimy and the insects produce the natural sound of constant twanging.), Flight, Social Influencing, Immortality (Type: 2), Resistance to Madness Manipulation (Can look at and be around its peers.), Minor Body Control (All of the insects have differences in their morphology.), Possible Stealth Mastery (Was unable to be found by police men.)

Attack Potency: Varies from Athlete level to Wall level (Was able to lift a human in a pod off the ground about half the size of an antique car and can overpower adults.)