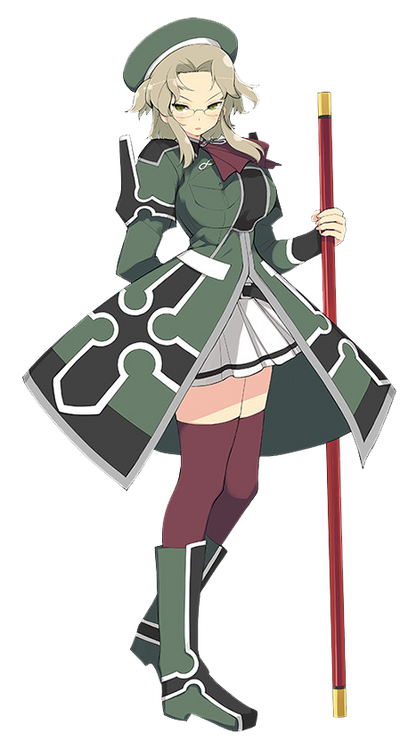 A third-year at Hebijo Clandestine Girls' Academy and Miyabi's best friend. She was hospitalized for one year following the same event that afflicted Miyabi, after which she retired from shinobi life to support her best friend's recovery.

Since everything she does is for Miyabi, she's working together with her to reconstruct the Hebijo facility. In combat, she can manipulate the length and thickness of the pole she uses as a weapon.

Attack Potency: Large Building level (Should be comparable to Miyabi,and Ryona, who can create a large ice sculpture effortlessly. She has fought multiple other strong shinobi like Hikage), higher with Frantic Mode and Root of Calamity

Speed: Supersonic (Can keep up with her teammates, such as her sister, and other strong shinobi like Hikage and Katsuragi)

Stamina: Above average (Mostly due to her training as a shinobi. Is a student at Hebijo Academy, where they reportedly train for up to 30 hours at a time on occasion)

Range: Extended melee range to several meters with her staff, tens of meters with Ninja Arts

Weaknesses: Temperamental and easily flustered, can be obsessive when it comes to Miyabi. Also highly vulnerable when her clothes are ripped in battle.

Dead Fox: Imu moves about in random, sporadic directions, causing flashes of light due to both her incredible speed and the lightning from her staff. She then charges at her enemies and replicates the initial start of her attack, finishing it off by slamming her staff into the ground, sending enemies flying. This attack is somewhat stationary but does have an effect on enemies despite this. It stuns enemies on contact, leaving them defenseless for a duration of time.

Rolling Thunder: Imu starts spinning her staff above her head to generate electricity. Then she throws at her opponent(s) like a boomerang. In Estival Versus, while quickly forming a hand sign, Imu extends the shockwave created by the staff into an upward spiral; engulfing everything that is trapped within.

Thunder Fox: Imu starts stroking her staff, causing it to glow bright red. It grows in width, but shrinks in height, forming a jar-like object that opens up and releases several floating fox-like creatures. The foxes start spinning around, generating a tornado of lightning around Imu.

Shinobi Transformation: A physical technique that uses the Attribute of Yang, in where the fundamental essence of the shinobi is used as a battle tool by releasing the body's internal spiritual energy in all six chakras simultaneously.

Frantic Mode: A technique that uses the Attribute of Yin, performed by stripping off one's clothing, resulting in a considerable enhancement in speed and attack power by absorbing blood spilled within the shinobi barrier. However, it is a double-edged sword, as it also incurs a significant penalty to defense.

Retrieved from "https://vsbattles.fandom.com/wiki/Imu?oldid=5969775"
Community content is available under CC-BY-SA unless otherwise noted.