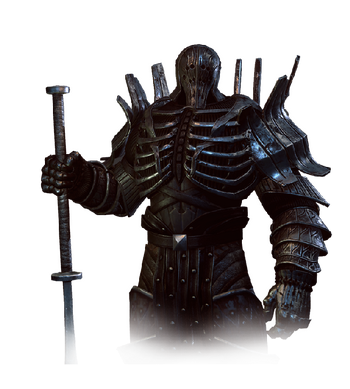 Imlerith was a warrior of the Wild Hunt and one of the generals of Eredin's army. He wielded great power and was one of the most fearsome and intimidating opponents Geralt has ever encountered.

Powers and Abilities: Superhuman Physical Characteristics, Acrobatics, Teleportation (Can teleport in short distances), Ice Manipulation (Can put defensive hoarfrost on himself while teleporting), Flight (The Wild Hunt (the spectres) is known for galloping across the sky), Master Mace user, Limited Astral Projection, Magnetism Manipulation, Memory Manipulation, Madness Manipulation and Perception Manipulation (Spectral emanations of the Red Riders emit a magnetic field that distors the subject's perception, causing either insanity or amnesia), Resistance to Ice Manipulation (Elf Aen Elle elves are used to cold, and normal ice doesn't work on them), High Pain Tolerance (Endured Geralt burning his head and having his chest pierced by him)

Attack Potency: Building level+ (Fought with Geralt and gave him a hard time)

Speed: Massively Hypersonic+ (Could keep up with Geralt)

Lifting Strength: At least Class 5, likely Class 25 (Made Geralt struggle with blocking a strike of his mace. Also he grabbed and overpowered him, forcing Geralt to use Igni)

Stamina: High (Fought for an extended period during Battle of Kaer Morhen and later wasn't shown to be tired by his duel with Geralt)

Intelligence: Above average (Was the general of the Wild Hunt for many years or even decades and is a very battle-experienced warrior)

Retrieved from "https://vsbattles.fandom.com/wiki/Imlerith?oldid=6054254"
Community content is available under CC-BY-SA unless otherwise noted.