Imix is the Elemental Prince of Fire, and the evil protector of the element, and is older than the world itself. As with his element, he is passionate and ill-tempered, quickly engaging in battles. Imix's activities in the world are largely confined to Oerth and his work with the Temple of Elemental Evil, where he left his aspect to defend it.

Name: Imix, Prince of Evil Fire, The Eternal Flame, The All Consuming Fire

Attack Potency: At least Small City level+ (As a CR 17 creature he is vastly superior to legendary dragons capable of warping the weather around their lairs) | At least Island level+ (Can cause desert-like heat around him upon entering an area)

Lifting Strength: Class K (Can push a bit more than 100 metric tons) | At least Class K (Should be superior to previously)

Durability: At least Small City level+ (Could endure attacks from adventurers on his own level) | At least Island level+ (Can battle other Elemental Lords, namely Olhydra)

Intelligence: Extraordinary Genius, is listed at an intelligence score of 20, making him nearly comparable to the legendary intellect of the Elder Brain, a being comprised of the consciousness of all Mind Flayers in its own sub-section of the civilization, with the civilization being able to build highly advanced space-faring vessels despite the medieval average of the available tech 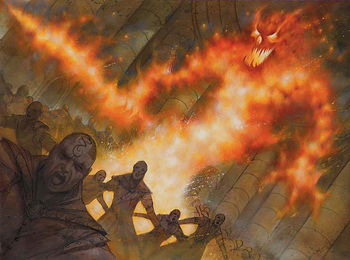 Artwork of Imix from Return to the Temple of Elemental Evil