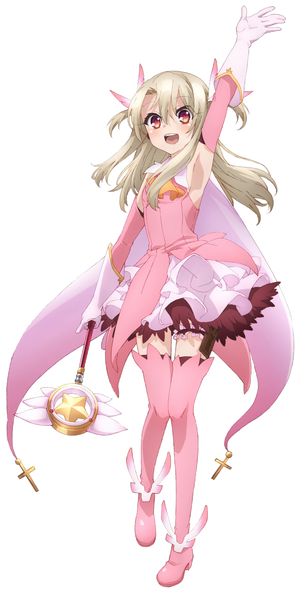 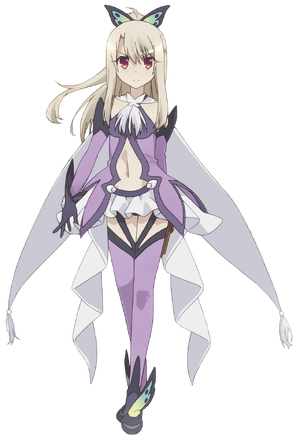 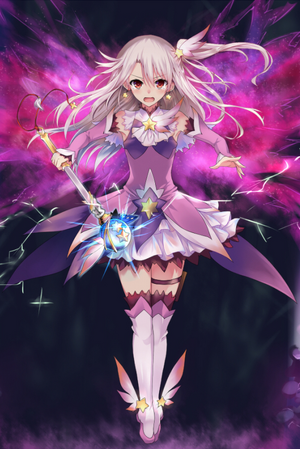 This version of Illya is different from her Fate/stay night counterpart in many ways. Prior to the fourth Holy Grail War, Illya was born with the knowledge to be utilized for said war but through the actions and decisions of her parents along with sealing her memories and knowledge when she was eight months old, this was prevented and she and her family later relocated to Fuyuki, Japan, where she grew up to live a normal life along with her family's two maids and even her adoptive brother, Shirou, who was brought into the family at some point in her life.

However all this comes to an end when she meets Magical Ruby, a sentient wand with a playful personality that she ends up accidentally making a contract with, becoming her new master and getting thrown into a series of events along with a new friend, Miyu Edelfelt, eventually coming to learn many things like her origins and who she is as well as who Miyu truly is.

Powers and Abilities: Superhuman Physical Characteristics, Transformation, Magic, Barrier Creation (Can create barriers of different sizes and shapes and use them defensively as well as restrict ones movement), Healing, Flight and Levitation, Energy Projection, Dimensional Travel (Can travel to the Mirror World, which is a replica of the real world), Resistance to Mind Manipulation (Resisted Angelica's attempt to mind control her and erase her memories while still barely conscious) | When using her cards, she gains various abilities associated with each: Enhanced Senses, Weapon Mastery, Vehicular Mastery (with Saber and Rider Install), Resistance to Magic with Saber, Lancer and Rider Install (Including effects such as Petrification, Mind Manipulation, and Spatial Manipulation), Regeneration Negation and Causality Manipulation with Lancer Install, nullify low rank magic and magical contracts with Rule Breaker using Caster Include, Petrification with Rider Install, Duplication, Invisibility and Stealth Mastery with Assassin Install, Invulnerability, Reactive Evolution, Resurrection, and Mad Enhancement with Berserker Install

Attack Potency: Island level (Is able to fight the Corrupted Class Card Servants of Rider, Saber, and Berserker, whose parameters are lowered by 1 or 2 ranks but should still be around this power, and harm them. Can fight Chloe who has the power of Archer) | Varies, Wall level to Island level (Gains the parameters of various Servants of the Fate/stay night series when using their Class Cards, going from Assassin who was noted to be very weak in power to be as strong as Gorgon when installing Rider on top of Heracles Install. The latter of which is enough to allow her to trade blows with Beatrice, whose strength when using Magni's Class Card is greater than that of Heracles and can match Gorgon). Large Island level with Bellerophon (Comparable to the original Bellerophon, which managed to overpower Excalibur Morgan with help from Shirou's Rho Aius) and with Excalibur (Comparable to the original Excalibur, and as an A++-Rank Anti-Fortress Noble Phantasm, it should be superior to Spartacus' self-destruction). The Barbed Spear that Pierces with Death ignores conventional durability (It reverses cause and effect to bypass barriers and always strike its target's heart). | Island level (Is Illya's strongest form, thus is likely to be as strong as Gorgon Install. Cut Ig-Alima in half, a giant Noble Phantasm that is a Divine Construct and is named as a Mountain Cutting sword). Large Island level with Magecraft (Pierced through Gilgamesh's Shield of the Gods, a shield durable enough to completely tank Chloe's Broken Phantasm projection of Excalibur which, though a "paper-mache" projection than that of the original, should be comparable to Noble Phantasms like Caliburn). Planet level with Quintett Feuer (Was able to clash with and eventually overpower Gilgamesh's Enuma Elish, which had tore open the Mirror World and which Gilgamesh stated of intending to use it to "blow her along with her world")

Speed: Massively Hypersonic (Able to react and keep up with the Corrupted Servants who should still be around this fast in speed. Can keep up with Bazett's attacks, and able to respond attacks from those of the Gate of Babylon)

Durability: Island level (Should be comparable to Miyu, who can block an attack from a corrupt Saber. Can defend and block attacks from Chloe. Can block an attack from Bazett and survive another though she was significantly injured). Higher with Barriers (Ruby passively provides her with an A-Rank barrier protection which, when putting at maximum output, is durable and strong enough to defend from a series of light beams from a corrupt Caster. She was also able to produce a barrier strong enough to take Chloe's Caladbolg III) | Varies, Wall level to Island level | Island level

Stamina: High (Illya is an active and energetic schoolgirl and has fought for hours at a time without rest even after exhausting her natural mana reserves. She can also draw on an infinite amount of mana from the Kaleidoscope to fuel her attacks, but she can only draw on so much mana at a time.)

Intelligence: Illya's lineage and obsession with magical girl anime have given her a natural affinity for utilizing magecraft through Ruby, quickly learning how to fly and improvising various kinds of attacks in the heat of battle. She's ingenious enough to use the barriers that she has only previously used for defense to bind Bazett and held her own despite the Enforcer's far greater combat experience in dealing with magi. She has also become well-accustomed to the use of the Class Cards, seamlessly switching to the Caster Class Card to stab Darius with Rule Breaker after distracting him with Excalibur moments before.

Weaknesses: As a young girl, she is naive and an airhead at times, and refuses to use lethal force against her foes unless necessary. Her transformation and magical supply will be cut if separated from Ruby either by being more than fifty meters apart or after thirty seconds passes. Is weaker in close combat than in magecraft outside of using Class Cards. Can only Install one Class Card at a time, though she can switch to another or even fuse them as seen in the use of using Rider Install on top of her active Berserker Install during her fight with Beatrice. Using her Kaleid Liner Zwei form is risky as it turns all of her body's circuit systems (muscle, nervous, lymphatic, and blood courses) into pseudo-magical circuits, putting her life at risk due to damaging her organs after.

Class Cards are artifacts created by the Ainsworth Family for their Holy Grail Wars. They are described as a system for summoning Heroic Spirits. In contrast, the summoning of them in other worlds puts them through a container to manifest through physically; it is done in the world where Miyu and the Ainsworth come from in the form of cards that draws out the power of Heroic Spirits themselves instead. Two known methods are done this way when drawing out the Heroic Spirits powers: Include, which draws out the Heroic Spirits Noble Phantasm or weapon. And Install, which instead transforms the user and has them take up their Noble Phantasm, Skills, and appearance in accordance to the Class Card of the Heroic Spirit they are using, with this method being the real purpose of using the cards by having their existence be overwritten with a fraction of their power to become that of the hero’s own.

Illya’s strongest form, used when having both Ruby and Sapphire together and granting her an incredible boost in power. Through this, it allowed Illya to fight off against Gilgamesh's attacks and giant form, keeping up with the Gate of Babylon as well as cut through the Divine Construct Ig-Alima and even pierce through his Shield of the Gods, which was durable enough to completely tank a Broken Phantasm projection of Chloe's Excalibur.