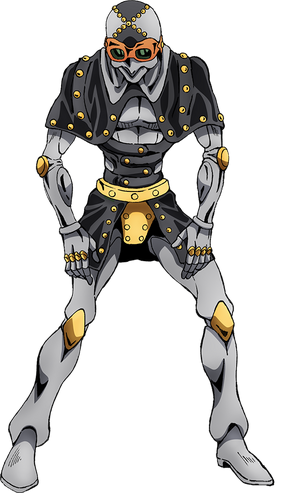 Illuso (イルーゾォ Irūzō) is a minor antagonist featured in JoJo's Bizarre Adventure Part V: Vento Aureo. He is an assassin and member of La Squadra Esecuzioni who confront Pannacotta Fugo, Leone Abbacchio and Giorno Giovanna. He is the stand user of Man in the Mirror.

Tier: 9-C physically, 9-B with Man in the Mirror

Powers and Abilities: Extrasensory Perception (Capable of seeing ghosts and souls among some other supernatural forces that are normally otherwise invisible), Aura, and Summoning (Of his Stand). Man in the Mirror has Superhuman Physical Characteristics, Invisibility (Stands can only be seen by other Stands and Stand Users), Intangibility, Non-Corporeality (As a Stand, Man in the Mirror can only be seen and affected by other Stands), Non-Physical Interaction (Stands can interact with ghosts and other Stands), Limited Dimensional Travel (Can travel inside and outside the Mirror World), BFR & Soul Manipulation (Can send others to the Mirror World. Stand energy can't pass without his permission, separating it from its user), Biological Manipulation (Can drag separate parts of other persons into the Mirror World, however they are still functional), Limited Spatial Manipulation (By allowing parts of things into the mirror world but not other parts of them, he can cut things, such as when he allowed the healthy part of his body to enter the Mirror World while disallowing to enter the part of his body infected with a virus, cutting it off), Pocket Reality Manipulation (Has the previously mentioned control over the Mirror World. This realm itself is seemingly identical to the real world and will have the same changes the real world has even if they aren't generated by anyone there, it also has no other life in it)

Attack Potency: Street level physically (Harmed a defenseless Abbacchio), Wall level with Man in the Mirror (Blocked a punch from Purple Haze using "every last drop of [its] strength", his abilities were stated to consume its power before this and was damaged given the loss of his arm. Can easily damage Pannacotta Fugo), able to ignore durability in some ways

Speed: Peak Human physically, Unknown with Man in the Mirror

Durability: Street level physically, Wall level with Man in the Mirror (From its own AP. Took hits from Moody Blues), Illuso's ability to act against his targets from within the Mirror World makes him hard to effect

Standard Equipment: Man in the Mirror

Weaknesses: Any damage taken by Man in the Mirror will reflect back onto Illuso. Requires reflective surfaces to create passageways to the Mirror World. His strategy depends fully on leaving his opponent unable to defend himself. He can be tricked into bringing things he does not intend into the Mirror World

Man in The Mirror: Man in the Mirror is a humanoid type stand with a generally leathery aesthetic and what appears to be goggles for eyes. While it can use melee attacks, it is not meant to be a close combat stand. Instead, it is used to disarm its targets and bring them into the Mirror World. Illuso can bring things he chooses into the mirror world, and leave out other things. The things left still function, but only work on the outside world even if the person using them is inside the mirror world. Nothing alive exists within the mirror world except that which Illuso brings inside, and that which is on the outside cannot properly effect the Mirror World. Equipment, clothing, and other things on the person will be merely images made of spiritual energy while in the Mirror World, and thus have no actual function. Objects within the mirror world "belong to the realm of death" and can only be used, moved, or touched by Man in The Mirror. In addition, by taking in parts of people but not other parts, he can leave them part way through a mirror and incapacitate them, or divide them along the portals, splitting them as a result.

Bell Hydra (Blood Lad) Bell's Profile (Bell had intel on Man in The Mirror and speed was equalized.)