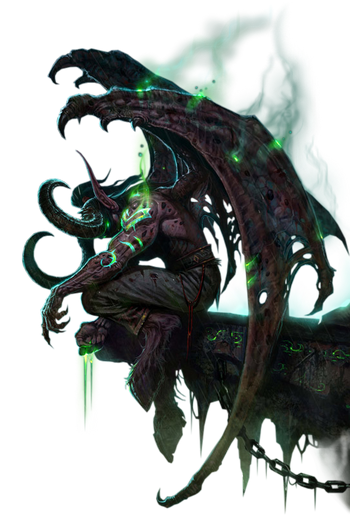 Illidan Stormrage was the self-proclaimed Lord of Outland. Once an unusually gifted sorcerer, his pursuit of arcane mastery led him to commit numerous atrocities against his people and Azeroth, and he was imprisoned for ten thousand years before his escape during the Second Invasion of the Burning Legion.

Illidan was the creator and former master of the Demon Hunter order known as the Illidari. He created the order with the sole purpose of bringing the Legion's Burning Crusade to an end. Seeking to dispose of this new threat, Kil'jaeden the Deceiver tricked the armies of the Horde and the Alliance into invading Outland once more in an attempt to liberate the world from its new dark master. Illidan was finally confronted by his pursuers atop the Black Temple, his seat of power, where his reign was put to an end.

During the events of the Legion's Third Invasion on Azeroth Illidan was resurrected and once again allied himself with the defenders of Azeroth. After the successful invasion of Argus, the Burning Legion's homeworld, and the subsequent imprisonment of Sargeras at the Seat of the Pantheon Illidan chose to stay behind and watch over the Dark Titan as his jailer.

Attack Potency: City level (Managed to briefly hold off Mannoroth in a fight during The War of the Ancients, likely higher (grew much stronger after adding Gul'dan's power to his own by absorbing it from his skull).

Speed: At least Subsonic, likely higher reactions and combat speed (Even while he was in a magically and physically weakened state, and fighting multiple enemies, including Maiev Shadowsong, his attacks were said to be faster than the eye could follow)

Durability: City level (Traded blows with Mannoroth as well as Arthas before he obtained the Helm of Domination), likely higher

Intelligence: Gifted. Illidan has displayed tremendous talent in multiple fields of magic. His amber eyes, before they were burned off and replaced with the Cursed Vision of Sargeras, marked him as a naturally talented druid, but Illidan never had the patience necessary for the druidic arts. Instead, he chose the path of Arcane magic and quickly became one of the most powerful magi among the Night Elves. Illidan is also a brilliant strategist that has led many successful wars against the Burning Legion even managing to conquer multiple planets held by the demons across the cosmos.

Weaknesses: Illidan is power-hungry and overconfident.