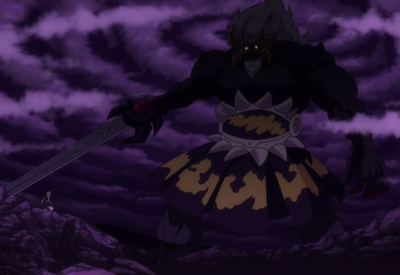 Ikusa-Tsunagi (イクサツナギ Ikusatsunagi) is one of the Yakuma Eighteen Battle Gods Magic passed down through the now-extinct Yakuma clan that summons one of the 18 Battle Gods, Ikusa-Tsunagi. He can be summoned by sacrificing the lives of many people and is at the behest of said summoner.

Attack Potency: Large Mountain level (His Sword Slash did this much damage)

Speed: Sub-Relativistic (Can likely keep up with Natsu)

Lifting Strength: At least Class M (Comparable to Base Natsu)

Striking Strength: Large Mountain Class (Can cut a large crater into the ground)

Durability: Large Mountain level (Tanked a hit from X792 Base Natsu with no visible injury)

Intelligence: Average (Doesn't speak, but does appear to be aware of things happening around him)

Giant Sword: Ikusa-Tsunagi possesses immeasurable amounts of strength, being able to carry around a sword roughly the size of himself and swing it so hard that it tears the ground apart for apparent kilometers in distance. The Battle God attacks and moves at the behest of summoner, being that they are fully controlled by the caster. However with enough force to the head area the Battle God can be destroyed.

Giant Sword
Add a photo to this gallery

Start a Discussion Discussions about Ikusa-Tsunagi