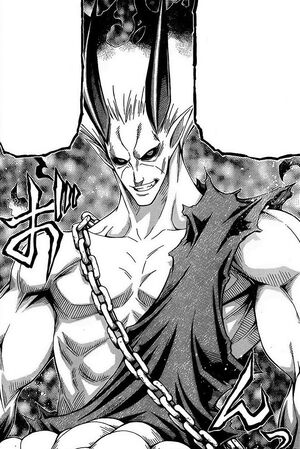 Iihiko Shishime (獅子目 言彦, Shishime Iihiko) was the first man Ajimu Najimi could not defeat, and whose legend has been passed down for five thousand years within the Shiranui Village. Iihiko is the chief antagonist of the Unknown Shiranui Arc. While Medaka can be considered a shonen hero, Iihiko would best be described as a Fairy Tale Hero.

Powers and Abilities: Superhuman Physical Characteristics, Enhanced Senses, Weapon Mastery, Regeneration Negation, can prevent stamina from recovering, Master Martial Artist, Possession, Non-Physical Interaction (He was capable of ignoring Ajimu's non-corporeal nature), Attack Reflection, can bypass Damage Transfer, Immortality (Type 1 and 6), Power Nullification (None of Medaka's or Ajimu's abilities worked on him), Supernatural Luck (His luck should be comparable to Medaka's due to being a hero like her), Resistance to Power Nullification (For his Supernatural Luck, common abnormals have their luck barely affected by an ability that makes nothing stray from its usual chances, and Iihiko's luck far exceeds theirs)

Durability: Unknown, at least City Block level, possibly Moon level. Unknown with Subjective Immunity and Irreversible Destruction (Any attack Iihiko does not recognize will not affect him, even if it would otherwise damage him. In addition, the stronger an attack used against him that he does acknowledge, the further the attack itself will be "broken", and never return to normal).

Weaknesses: The irreversible destruction is a double-edged sword, if he accidentally hits himself, it will not heal. And if Iihiko is defeated, then the damage will become reparable. It is possible to trick Iihiko into recognizing an attack if you can convince him that the attack is "fresh"

Note 1: To make this profile possible, it had to avoid the claim of Iihiko being considered a higher-dimensional entity (that statement sounds more like an expression), and even then, it is arguable whether or not this is true, but he won against a ridiculously powerful character simply because the author wanted him to.

Note 2: Regarding the Light Speed Hyperbole, there are only so many statements that could be dismissed as mere hyperbole, but none of then with any contradictions whatsoever. Even narration point to certain characters (5 at the maximum) being lightspeed, with no contradictions at all. In fact Ajimu blowing up the star, the nature of Hinokage's Theme Song, and Medaka destroying the moon overnight only point towards it. Even Iihiko called Medaka's Kurokami Phantom "slow, right before beating her with glasses. 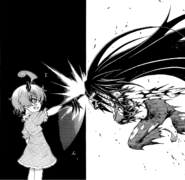 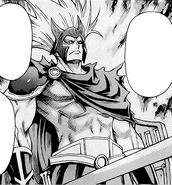 Iihiko back in ancient times, as a fairy tale hero
Add a photo to this gallery

Caster of Red (Shakespeare) (Fate/Apocrypha) Caster of Red's profile (Speed is Equalized. Caster has knowledge of Iihiko's stories, and iihiko knows who Shakespeare is from reputation. Caster is given prep.)