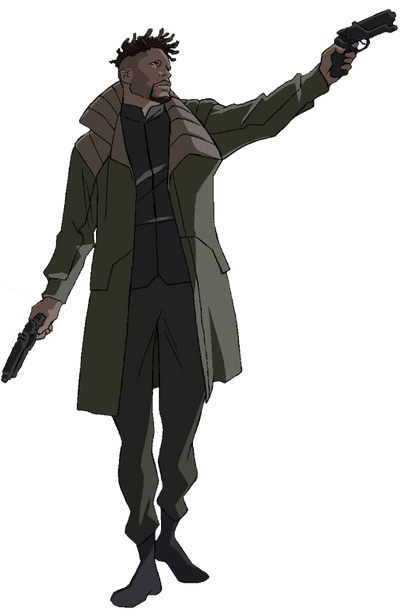 Iggy Cygnus is a Nexus-8 replicant featured in Blade Runner Black Out 2022.

He was a combat model on Kalanthia but after shooting his enemy and discovering he was also a replicant, Iggy realized that to humans this war was no more than "toy soldiers in a sandbox". He then deserted and escaped to Earth. On Earth he found that the Human Supremacy Movement began hunting down and killing replicants. One of these replicants, Trixie, is attacked by a group of thugs but he rescued her. Iggy hatches a plan with Trixie to destroy the Tyrell Corporation's database of registered replicants, so that replicants can no longer be hunted. Trixie befriends Ren, a human who is a technician at the Tyrell Corporation in charge of launching nuclear missiles. Ren agrees to redirect a test missile to detonate over Los Angeles, blacking out the city and wiping out all electronic data. At the same time, Trixie and Iggy hijack a fuel truck to physically destroy the Tyrell Corporation's servers. The operation is a success, with the servers destroyed and power to Los Angeles disabled. However, Trixie is killed by security forces in the process. Iggy manages to escape and removes his right eye, the only thing that can identify him as a replicant.

Intelligence: Above Average (As a 'Nexus' series of replicant should be superior to those of a human)

Retrieved from "https://vsbattles.fandom.com/wiki/Iggy_Cygnus?oldid=4928840"
Community content is available under CC-BY-SA unless otherwise noted.