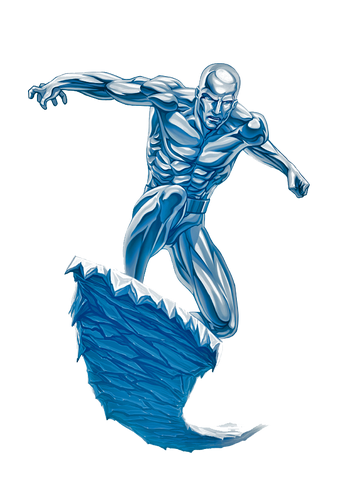 Iceman (Robert "Bobby" Drake) is a fictional character, a superhero that appears in comic books published by Marvel Comics. He is a founding member of the X-Men. A mutant, Iceman has the ability of cryokinesis where he can freeze anything around him and can also turn his body into ice. Although he is an Omega-level mutant, Drake has yet to tap into his full mutant potential. Over the years he has taken more interest in developing his abilities. One of the original X-Men, Iceman has had a frequent presence in X-Men (and Spider-Man)-related comics, video games, animated series, and movies.

Powers and Abilities: Superhuman Physical Characteristics, Thermal Energy Generation and Manipulation, Absolute Zero (Proof it's literal), Immunity to sub-zero temperatures, Forcefield creation, Ice Manipulation, Telekinesis, Matter Manipulation on a Molecular level, Immortality (Type 1), Can temporarily add the mass of a body of water to his own to increase his strength and durability, Teleportation, Shapeshifting, Duplication, Can turn into water, vapor and ice as a form of Intangibility, Regeneration (High; Can reform from mere moisture molecules. His own explanation. More Examples Of His Regen), Flight / Levitation, Blood Manipulation (Can freeze someone's blood easily), Limited Pseudo-Omnipresence

Attack Potency: Unknown | At least Multi-City Block level, likely Town level (Created a large iceberg, blew up a building with ice, froze a lake of fire in Hell, Froze an exploding nuclear reactor, turned the rain into ice, Created an Ice Voltron, Replaced the Empire State Building's antenna with a Christmas tree, Created a gigantic ice tower, Froze the Louvre Museum, Created a city of ice) | At least Country level (Created a global Ice Age, which yields this. Could still grow in power and potentially destroy the whole world), likely Solar System level (Incapitated the Juggernaut, defeated the Red Hulk, froze the Juggernaut at the speed of light, capable of restraining Thor)

Speed: At least High Hypersonic (At least Escape Velocity, also reacted to a nuclear explosion. Can also react to and outpace missiles and torpedos), Pseudo-Omnipresence at his full potential (Across all water molecules in the world)

Intelligence: Iceman is a skilled hand-to-hand combat and is comfortable and proficient in the use of his powers, having been coached by the likes of Black Widow and Hercules in the former. In addition, his time as a member of the X-Men has given him experience to fight a wide variety of adversaries.

Weaknesses: He can only usually form ice continually for a period of about 5 hours before becoming mentally exhausted and lacks actual creativity and imagination when using his powers due to his generally laid-back personality, and aversion towards killing his opponents.

Notable Attacks/Techniques: Robert Drake has been stated to be an Omega Level Mutant. He was as well considered as an Omega Level Mutate by Supergiant, an Alpha-Level Mutant by Apocalypse, a High Threat by the O*N*E. According to Prosh, his Comparative Mutagenic Power Register was of 3.2.

His powers aren't used to their full potential but have been unlocked on some occasions by encountering Loki, Mikhail Rasputin and Emma Frost. On other occasions, he was unlocked by telepaths, such as Psylocke.

Thermokinesis: Iceman is a mutant with the superhuman ability to lower his external and internal body temperature, projecting intense coldness from his body. Like any normal human being's, the nerve centers for regulating Iceman's body temperature are found in the part of the brain called the hypothalamus. However, Iceman can mentally override his hypothalamus to allow his body temperature to be lowered by an unknown internal mechanism. This ability converts the latent thermal energies in and around his body into an unknown form of energy that is efficiently dissipated. A related mutation has rendered his body tissues unaffected by sub-zero temperatures. Iceman can consciously, immediately lower his body temperature from its normal 98.6 Fahrenheit to absolute zero (The point where all molecular motion stops.) and lower within the span of a few tenths of a second. Iceman's power to generate cold is so great, he was able to stop a massive nuclear explosion.

As his body temperature falls, the surrounding moisture in the air that is in contact with him is similarly lowered. Just as condensed moisture forms frost, this moisture forms an icy covering which encompasses his entire body. It also obscures his facial features. When Iceman first began to completely lower his body temperature, this covering took on a more snow-like appearance. But as he learned to increase the severity of his coldness, the covering assumed the consistency of crystalline ice that it has today. This ice constantly cracks with any movement of his body, and immediately reforms. (Hence, there is a cracking sound when Iceman, covered with ice, moves.) Through practice, Iceman has learned to control the intensity of his coldness, and he can selectively lower the temperature of isolated parts of his body.

Cryokinesis: Iceman can use his mutant ability to control moisture such as to freeze any air moisture into super-hard ice. This ice can be formed into any object of his choosing: the only limitations are his own imagination and the ambient air temperature which determines how long his ice sculpture will stay icy. He does not have to hold the ice physically with his hands in order to shape it. Apparently, he can simply direct the waves of coldness he projects in certain ways so as to create ice in the shape he desires. In the past, Iceman has formed ice-ladders, ice-slides, ice-shields, ice-bats and other constructs of ice. Iceman has created constructs of ice so powerful that he was able to easily encase and contain the likes of the Hulk with him being unable to break out of it for quite some time. On at least one occasion, he has even been shown to make it snow or cause a blizzard.

Iceman is able to form a rising column of ice beneath his feet, capable of lifting him off the ground. The tensile strength of the column is determined by its thickness and its steadiness by how well it has been braced. A well-braced and regular column, 6 feet in diameter at its base, is able to support his weight without toppling for about 85 feet in a 40-mile per hour wind. By forming long ice-ramps connected either to his ice-column or to an existing structure like a building or a bridge, Iceman is able to travel above the ground by sliding down the ramp he is creating. Unless he creates supports periodically, the ramp will crack beneath him, unable to support their combined weight. Iceman although has shown that he is not limited to creating constructs and can fly on his own with his control over moisture.

Iceman's control of his powers are so vast that it extends to the molecular level, to the point that he can freeze all of the molecules of an object/being with a thought. An example would be freezing blood in the veins, thereby stopping flow to the brain. He has demonstrated the ability to control chemical reactions on the molecular level, at one point preventing Sunfire from accessing his powers.

Due to the amount of water on Earth, Iceman has a virtually unlimited supply of moisture since it is always present in the surrounding air or environment. Even desert air has sufficient moisture content for him to make temporary practical use of; however, the mental effort needed to employ his mutant power under these circumstances could eventually fatigue him and render his freezing ability temporarily dysfunctional.

Hydrokinesis: Iceman can use surrounding moisture to augment himself, allowing him to travel within large bodies of water very quickly. He accomplishes this by breaking himself down to his base levels and reforming at the destination. He is able to convert his body to gigantic proportions as well, through absorption of a body of water or water vapor in the air. One side effect of this is he gains superhuman strength to match his superhuman size. Wherever there is any moisture, Iceman is a threat. Iceman has demonstrated the ability to be transformed into nothing more than water vapor, yet remain conscious and retain the use of his powers. His conscious control of his abilities has allowed him to exist simultaneously in two places at once.

His victory over Oblivion is considered as massive Plot-Induced Stupidity and an Outlier.

This Iceman should not be confused with Ice Man from Mega Man's Universe.