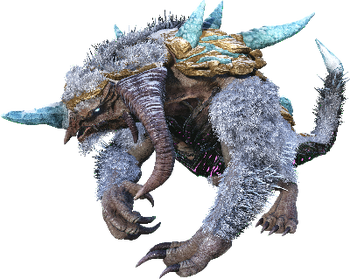 The Ice Titan is a boss creature from the game Ark: Survival Evolved, it was first introduced in the Extinction dlc for the game and is often considered as one of the strongest creatures in the game.

Attack Potency: Small Town level (Far superior to Boss Monsters and the Titanosaur, can freeze multiple Titanosaurs in one shot)

Lifting Strength: At least Class M (Superior to the Paracer, comparable to the Titanosaur and Boss Monsters)

Durability: Small Town level (Can withstand hits from other Titans)

Stamina: High (Equal to The Dragon)

Retrieved from "https://vsbattles.fandom.com/wiki/Ice_Titan?oldid=6097531"
Community content is available under CC-BY-SA unless otherwise noted.