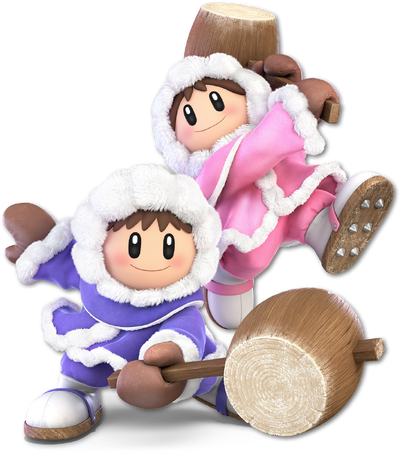 The Ice Climbers are a duo of climbers who starred in the game of the same name. They are individually known as Popo and Nana. They spend their days climbing mountains and grabbing the various vegetables that grow there.

All previous, along with Ice Manipulation, Forcefield Creation, Damage Boost (Deals extra damage to opponents made of metal), Poison Manipulation (Can poison enemies with just their attacks), Attack Reflection (Can completely reflect an attack with their shields), Healing (Can heal themselves by parrying attacks with their shield), Acrobatics (All Smash Characters are capable of doing flips around the battlefield and being agile, this gets further upgraded to the point of being able to gain an extra mid-air jump), Life Absorption (Can drain the life of their opponents with their attacks), Empowerment (Gets stronger when both damaged, undamaged, and eating food), Magnetism Manipulation (Can magnetically attract all healing items towards them), Resistance to Weapons (Severely reduces the damage taken from weapon-based attacks), Air Manipulation (Can resist the effects of strong winds and air), Fire Manipulation and Explosion Manipulation (Severely reduces the damage taken from both fire and explosions).

Attack Potency: Likely Building level (They can individually trade blows with the Polar Bears, who can sink the whole building-sized mountain into the ground with a stomp) | At least Large Mountain level+ (Can damage other fighters, who can survive the moon falling on them), higher via Final Smash

Speed: At least Superhuman (Faster than numerous birds and the condor) | Massively FTL+ (Comparable to other fighters, who are able to react to and dodge Galeem's light beams)

Lifting Strength: Superhuman | Class K (Should be comparable to King Dedede who is able to swing his hammer with this much force)

Durability: Likely Building level | At least Large Mountain level+ (The fighters are capable of surviving the Moon crashing onto them)