Ice Age is an American media franchise centering on a group of mammals surviving the Paleolithic ice age. It consists of computer-animated films and TV specials and a series of video games. The films are produced by Blue Sky Studios, a division of 20th Century Fox Animation as a part of Walt Disney Studios (formerly 20th Century Fox). The series features the voices of Ray Romano, John Leguizamo, Denis Leary and Chris Wedge, who are the only constant cast members. Five films have been released in the series thus far: the original film of the same name in 2002, Ice Age: The Meltdown in 2006, Ice Age: Dawn of the Dinosaurs in 2009, Ice Age: Continental Drift in 2012, and Ice Age: Collision Course in 2016. As of April 2016, the franchise had generated $6 billion in revenue, making it one of the highest-grossing media franchises of all time.

Due to it being a verse being based on anthromorphic prehistoric animals, the verse isn't very strong. Most of the characters like Manfred have Wall level attack potency physically. There are at least Superhuman travel and reactions feats in the series.

There also exists a decent amount of abilites in the verse that you would expect from animals  such as Acrobatics, Adept Hand-to-hand combatant, Enhanced Senses, Animal Manipulation, Natural Weaponry, Stealth Mastery, Flight, Surface Scaling among others. 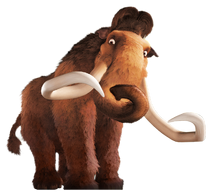 Manfred
Add a photo to this gallery