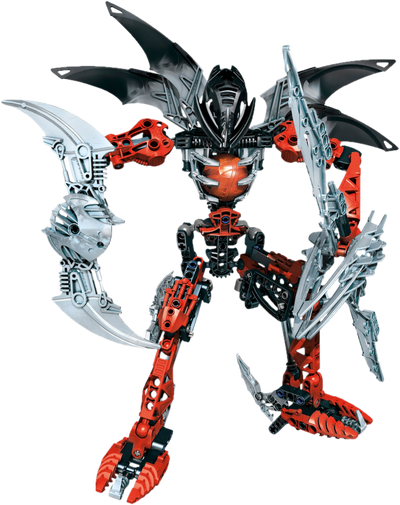 Like the rest of his kind, Icarax was created from Antidermis by Mata Nui as a member of the Brotherhood of Makuta, an organization dedicated to protecting the Matoran Universe and filling it with life in the form of the Rahi. Like his fellows, he was always instilled with a deep arrogance and ambition.

When Teridax shared his plan to overthrow Mata Nui, Icarax sided with him, along with most of the other Makuta. However, he ended up losing faith in Teridax’s leadership after his failures and decided to take over the Matoran Universe through nothing but his might. This lead to a confrontation with Teridax, in which the two of them fought for hours, culminating in Icarax’s defeat. Teridax spared him, however, for the role he’d have in his plans, and because he found him amusing.

While he may support Teridax and do as he commands, Icarax still yearns for the moment when he can defeat his “leader” and take his place.

Powers and Abilities: Superhuman Physical Characteristics, Flight (He can fly by growing wings), Makuta Physiology, Darkness Manipulation (Possesses mastery over elemental Shadow), Energy Manipulation, Matter Manipulation (Capable of creating Rahi from Protodermis and breaking down objects on a molecular level through various means), Mind Manipulation, Virus Manipulation (Can engineer and control energy-based viruses that can infect mechanical or biomechanical beings, or create new Rahi), Absorption (Can absorb others and take on their traits, even in his Antidermis form, and can absorb energy and drain it from others), Corruption (Types 2 and 3; Makuta can infect Kanohi with Kraata, and seventh-stage Kraata can do this from a distance. Shadow Leeches also drain beings of their inner light, tainting them with evil), Inorganic Physiology (Type 1), Non-Corporeal (In his true form, Icarax is a mass of Antidermis, which is pure energy), Possession (Can possess unoccupied bodies), Self-Sustenance (Types 1, 2, and 3), Shapeshifting and Sizeshifting, Telepathy (Can telepathically communicate with people across the Matoran Universe and read the minds of the strongest Toa), Longevity, Immortality (Type 6)

Powers and Abilities: Air Manipulation (Can control air and vacuums), Anger and Fear Inducement (Can enrage even the Toa and overwhelm them with terror), Animal Manipulation, Density Manipulation (Possesses complete control of his own density, and can manipulate the density of others with a touch; can turn things intangible, and objects and beings that are rendered intangible for long enough will cease to exist), Electricity Manipulation, Explosion Manipulation (Can make things explode violently), Gravity Manipulation, Magnetism Manipulation, Plant Manipulation, Plasma Manipulation, Poison Manipulation (Can poison things, living and unliving, even soil), Sleep Manipulation, Sound Manipulation (Can generate and control powerful sound waves that can shake objects apart), Weather Manipulation, Adaptation (Can instantly adapt to any situation), Deconstruction, Elasticity, Forcefield Creation, Healing, Heat and Laser Vision, Illusion Creation (Can form complex, long-term illusions), Invisibility (Can blend into any environment), Regeneration (Low-Mid; Can instantly regenerate from serious wounds, and he recovered from being devolved into a body that didn’t have room for his new internal organs), Statistics Amplification (Using Invulnerability, a Makuta can make themselves completely invulnerable to harm from an opponent that could've hurt them before), Statistics Reduction (A Makuta can slow down opponents using Slowness, eventually stopping them completely), Teleportation, Time Stop (Can freeze opponents in stasis fields that trap them in space and time), Resistance to cold or heat

Attack Potency: Mountain level, likely Island level (Easily defeated all of the Toa Nuva single-handedly, including Pohatu, who reduced Odina Fortress to dust, and overpowered both Gorast and Vamprah at once. Fought a casual Teridax for hours alongside a small army of Manas that he controlled), can ignore conventional durability with many of his powers.

Durability: Island level (Survived Gali’s Nova Blast, which destroyed Karzahni and could destroy Metru Nui, at point-blank range and without any serious injury). His immortality makes him hard to kill, as he can abandon his bodies whenever necessary.

Stamina: Extremely high. Icarax's stamina should be comparable to that of Toa, and the Toa Manga fought against the Kanohi Dragon for an entire month. He also fought against Teridax for several hours straight.

Range: Extended melee range, Kilometers (His minimum range should be comparable to a Toa's, such as Pohatu, who destroyed the massive Odina Fortress with a single timed Stone Blast) to Hundreds of Kilometers (His Power Scream can be heard from anywhere on Mata Nui) to Planetary (Icarax can teleport across the Matoran Universe) with his abilities

Standard Equipment: His Rotating Shadow Blades and Twin Sword, along with various other things.

Intelligence: Icarax possesses the sharp intellect of his kind and is highly skilled in strategy and combat, being the most skilled of all Makuta when it comes to melee combat. However, he dislikes long-term planning, finding it far too convoluted, and prefers to simply brutally kill anyone who opposes him.

Weaknesses: Icarax is extremely arrogant and is vulnerable to light. He can only use one of the Kraata powers at a time. In his Antidermis form, he can only access his mental powers, is weaker than normal, and needs a body to contain his essence so he doesn’t dissipate.

Makuta: Icarax is one of the Makuta, a powerful race of hundred beings created at the beginning of the Matoran Universe by Mata Nui. Although once a biomechanical being, Icarax has evolved past a physical body like the rest of his kind, taking on a form of pure Antidermis, though he requires a body to fully utilize his power and prevent his essence from drifting apart.

Kraata Powers: As with most Makuta, Icarax possesses all forty-two of the powers used by the forty-two variants of Kraata and, thus, Rahkshi. Some of these powers are already provided otherwise due to his nature as a Makuta, such as shapeshifting and mind reading. He can only have one of these powers active at a time, but he can easily and rapidly switch between them.