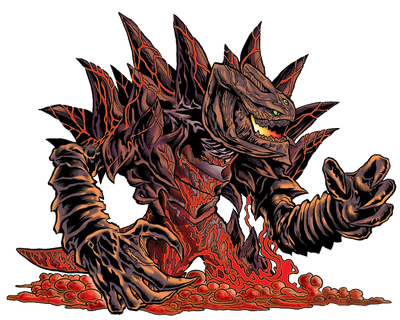 Iblis is a character in the Sonic the Hedgehog comic series and its spin-off comic series published by Archie Comics. It is an energetic spirit and the fiery power and destructive nature of Solaris.

Name: Iblis, The Flames of Disaster

Attack Potency: Universe level+ (Can battle the likes of Sonic, Shadow, and Silver)

Speed: Massively FTL+ (Can keep up with Sonic, Shadow, and Silver)

Range: Tens to hundreds of meters. Planetary with attacks and abilities (Burned an entire planet's surface and ruined its atmosphere)

Weaknesses: Unintelligent and lacking technique, its head is more vulnerable than the rest of its body.

Retrieved from "https://vsbattles.fandom.com/wiki/Iblis_(Archie_Pre-Genesis_Wave)?oldid=5179300"
Community content is available under CC-BY-SA unless otherwise noted.