I-No (イノ, Ino) is a character in the Guilty Gear fighting game series, making her first appearance as a boss of the third game, Guilty Gear XX; unlike bosses in previous games, she is freely playable from the start. She is a servant of Asuka R. Kreuz. Very little is known about her; in fact, her profile in Guilty Gear XX consists entirely of "UNKNOWN!!" repeated several times over. Information given thus far is also somewhat unclear as to the nature and origin of her hat, which resembles a witch's hat and seems to be animate. She also seems to derive pleasure from tormenting other characters, especially Dizzy.

Powers and Abilities: Superhuman Physical Characteristics, Immortality (Type 1 and 5), Self-Sustenance (Type 1 and 2), Flight, Time Manipulation, Time Travel (Time Slipper's main abilities are to travel through and manipulate time, including stopping it, Can strand others in time and dimensions, Sound-based attacks, Energy Blasts, Danmaku (Via her instant kill), Teleportation (Can travel through space and time), Portal Creation (Can create portals that is connected to different time periods), Acausality (Type 2 and 4; She has no past or future and is unwanted by Backyard), Physics Manipulation, Reality Warping, Existence Erasure and Causality Manipulation (She can warp reality, erase timelines and disturb cause and effect and physical phenomenons), Magic as Information Manipulation, Thread Manipulation and Limited Transmutation (Can manipulate her guitar strings and her hat), Matter Manipulation and Creation (Can manipulate matter and create clocks and tables), Enhanced Senses (Can sense people from different points in time and dimensions), Abstract Existence (Type 3), Non-Physical Interaction (Able to hit souls), Telepathy (Can telepathically talk with other people), Resistance to Extreme Cold, Cosmic Radiations, Information Manipulation and Transmutation (Resists getting her information rewritten), Material, Spiritual and Mental attacks (Able to fight Jack-O at Heaven's Edge which is likely part of Backyard, which assaults one's body mind, and soul) and Fear Manipulation (Unaffected by Bedman's insta kill)

Attack Potency: Universe level physically (Is a serious rival to Sol during GGXX. Managed to damage Jack-O and briefly kept up with Raven). Universe level+ with Hax (Can erase timelines with her power as time slipper). Able to ignore conventional durability by using her power as Time Slipper.

Speed: At least Massively FTL+, possibly Immeasurable (Kept up with Sol and Jack-O)

Durability: Universe level (Can take hits from Sol and not die). Immortality makes her difficult to kill.

Range: Standard melee range, thousands of kilometers with attacks and Universal with Hax.

Standard Equipment: Her guitar, Marlene, and her hat.

Intelligence: Very manipulative and privy to a lot of information from That Man.

Weaknesses: Time travel is difficult for her to do, by her own admission. She can be located during her time travel and stopped with the right tools. 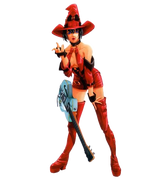