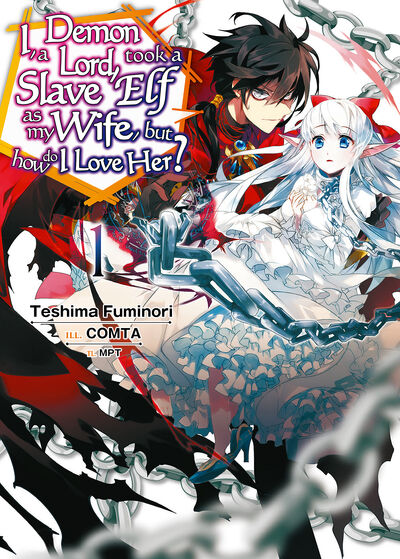 I, a Demon Lord, Took a Slave Elf as my Wife, but how do I Love Her? is a light novel series written by Teshima Fuminori and illustrated by COMTA.

Zagan is feared as an evil mage, he is awkward and has a sharp tongue, and once again had to put down thieves that encroached on his territory when he was researching that morning. In a dark auction, he finds a white slave elf, Nephie, who holds a peerless beauty. Falling in love with her at first sight, he uses his fortune to buy her, but as poor as he is socially, he doesn’t understand how to connect with her. Thus, the clumsy cohabitation of the mage that can’t convey his love, and the slave that pines for her master but doesn’t understand how to bring it up, begins.

The characters in the verse have Wall level physical strength as base, though they reach Small Building level AP and Durability with weapons and techniques. They have Superhuman-Subsonic speed. In terms of techniques multiple characters have anti-magic techniques, though some of those only apply to spells from the verse due to their mechanics. Expert mages like Zagan can have a large variety of spells, including elemental attack spells and magic shields.

Retrieved from "https://vsbattles.fandom.com/wiki/I,_a_Demon_Lord,_Took_a_Slave_Elf_as_my_Wife,_but_how_do_I_Love_Her%3F?oldid=6513125"
Community content is available under CC-BY-SA unless otherwise noted.