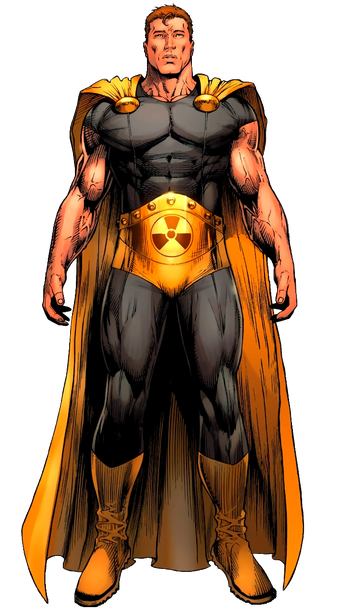 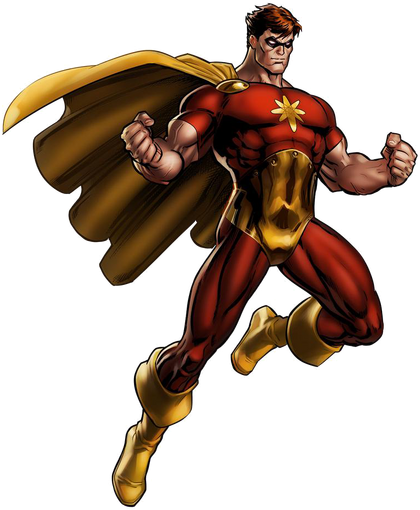 The super-being that would become known as Hyperion came to Earth as a baby, sent as the only survivor of the race of Eternals from a dying world. A human named Father raised him under the name of Marcus Milton, teaching him the morals of society. As an adult, he became the super hero known as Hyperion, and protected the world along a team of super humans known as the Squadron Supreme.

One day, his universe and another started colliding. While he was trying to prevent the destruction of his reality, he was left in the void his destroyed universe once occupied, as the only survivor, floating in nothingness. But, the group of scientists known as AIM from Earth-616 managed to pull him to their reality. He spent most of his time in captivity, until he was freed by the Avengers, who offered him a place in their ranks.

Attack Potency: Solar System level (Fought the Hulk until he reverted back into Bruce Banner. Strong enough to be considered the 'brother' of Thor. Oneshot Terminus, who has tanked attacks from Thor. Fought against and destroyed multiple Beyonder Drones, that were stated as capable of creating stars, but in the end, he was overwhelmed by their numbers)

Speed: Massively FTL+ Combat speed and Reactions (Capable of keeping up with the likes of Thor and Hulk). Unknown flight speed.

Lifting Strength: Class Y (Held apart 2 Earths from colliding with each other for a period of time)

Intelligence: Genius. Hyperion has been able to calculate the impact point of one of Ex Nihilo's Origin Bombs when Avenger's Tower computers could not, even noting specific flaws in the computers' design while doing it. He is capable of interpreting DNA code at a glance, accurately enough to determine parentage. His mind itself is a nonlinear photonic array, storing his memories in light, with virtually instantaneous recall: his mind is structured in such a manner that memories are to him as 'real' as the present, his most vivid memory dominating his perceptions.

Weaknesses: Solar energy depletion, susceptible to magic, abilities decrease if he is exposed to Argonite radiation as it prevents his body's ability to metabolize cosmic energy.