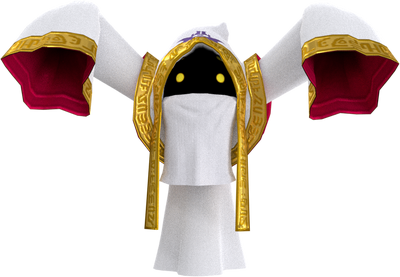 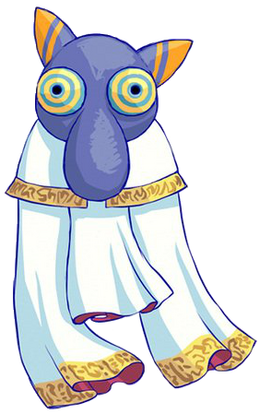 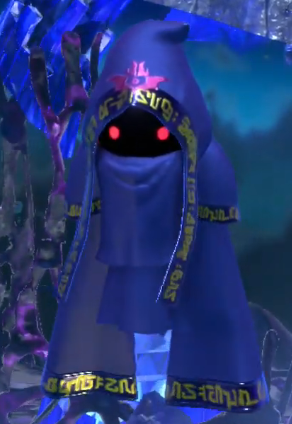 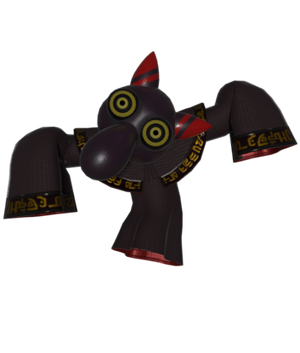 Lord Hyness is the cloaked priest leader of the Three Mage-Sisters and the Jambastion cult, an organization that worships Void Termina, their Dark Lord. Hyness, and presumably the Mage-Sisters, were banished to the edge of the universe long ago by unknown authorities. Apparently they were feared for their immense power. During his rant, Hyness says that he and his people were responsible for saving everyone from an unexplored "galactic crisis". He also says that those unknown authorities tried to erase them from history and that some called them mad. It's presumed that the Ancients were the ones fearing his power, but the truth remains a mystery.

During Heroes in Another Dimension he fell into a hole leading to Another Dimension and opened portals into several dimensions in it. He ended up swallowed by and trapped in a giant Jamba Heart, which corrupted him and made him more powerful, becoming Corrupt Hyness. It was revealed that he used to lead his people in a wiser way before his dark feelings got the better of him. He's ultimately restored to normal and is suggested that he and his people became more sociable towards the rest of the universe, no longer trying to destroy everything and peaceably hanging out in places, even if they are still practitioners their dark arts.

Age: Unknown, has lived for "aeons"

Superhuman Physical Characteristics, Speed Talking (Once spoke at a rate of about 1,274 WPM or around 21 WPS), Non-Physical Interaction (Scaling from the Mage-Sisters, who can affect Void Soul), Self-Sustenance (Type 1), Body Control (Can quickly rotate his head several times with no repercussion), Magic, Flight, Power Bestowal (Unlocked the natural power for magic of the Three Mage-Sisters, also seen as giving them powerful magic), Biological Manipulation (Unlocking the natural power of Francisca caused her body to turn blue, the same presumably happened to Flamberge and Zan Partizanne with their respective colors), Healing (Saved Francisca, Flamberge and Zan Partizanne from nearly dying), Energy Manipulation, Energy Projection, Light Manipulation, Darkness Manipulation, Fire Manipulation, Electricity Manipulation, Ice Manipulation, Berserk Mode (After losing his hood), Can summon the Three Mage-Sisters or logs dressed as them), Life Absorption (Drained energy from the Mages, leaving their bodies dark), Weapon Mastery (Can use the Mages' bodies or those logs offensively and defensively. They can also reflect projectiles), Telekinesis, Danmaku, Portal Creation and Dimensional Travel (His repeated chants opened a rift in the fabric of space that led to Another Dimension), Space-Time Manipulation (His actions broke down the fabric of spacetime), Resistance to Empathic Manipulation and Morality Manipulation (Unaffected by the presence of the individual Jamba Hearts, had numerous of them flying and merging in front of him in the place where Void Termina was sealed, forming a giant Jamba Heart. Was only corrupted after being swallowed and trapped by a complete giant Jamba Heart from Another Dimension for unknown periods of time. Comparable, if not superior to the resistance of the Three Mage-Sisters)

With Preparation he was able to achieve the following things: Resistance to Sealing (Overcame being sealed. Broke Void Termina's seal, although not entirely), limited Resurrection (Was doing a long ritual to resurrect Void Termina, which should only apply to his unique physiology) and likely Forcefield Creation (Without the Mage-Sisters in it, the Jambandra Base had a massive barrier bigger than planets which automatically appreciated when others approached)

As before but amped in the power and scale of some offensive powers, can no longer summon the Mage-Sisters

Attack Potency: Multi-Solar System level (Fought Kirby and 3 other Star Allies at once after they defeated the Three Mage-Sisters; It's up to interpretation if he's stronger than the Mage-Sisters given that gameplay-wise he's weaker, Hyness' higher rank on their organization potentially suggests something about it. Became stronger than before and than the Mage Sisters after absorbing their power [Although Zan Partizanne was unconsciously defeated at the time]), can ignore durability in some ways | At least Multi-Solar System level (Gained more power after being corrupted by a giant Jamba Heart that was complete, which on its own should have been able to transform into another Void Termina, as the other giant Jamba Heart did in the main story of Star Allies once completed; While it's unknown how much power Hyness received, he was described as an "even greater evil", likely placing him above the previous threat that was the Void Termina Kirby & co. defeated before. Fought Kirby and three other Star Allies), can ignore durability in some ways | At least Multi-Solar System level (Should maintain his boost in power after being purified in Heroes in Another Dimension, much like the Mage-Sisters), can ignore durability in some ways

Speed: Massively FTL+ (Was the one who suddenly scattered the Jamba Heart pieces across the universe [See note below] and kept up with beings capable to react, outrun and chase them. Comparable to Kirby and the Star Allies, which includes characters such as Meta Knight, Marx, Gooey and Ribbon. Above the Three Mage-Sisters, which were sent to find the Dark Hearts that rained down across the "galaxy" and bring them to him, which they were manually doing during the main story of Star Allies, which had no indication of lasting more than a week, if not much less time)

Lifting Strength: At least Regular Human, higher with magic (Can lift the Three Mage-Sisters hovering around and use them as projectiles)

Intelligence: Genius. Considered a genius among the mages, Hyness holds the position of a high-ranked priest, elite mage and "noble being", which made him the head of the Mage-Sisters and leader of his people. His magic appears to be among the greatest in the Kirby universe, feared by unknown authorities and able to overcome unspecified science. As a leader, Hyness has been described as having an "intoxicating charisma", he and his group were responsible for stopping a "galactic crisis" and they achieve great prosperity after they tried to erase their "very existence from history". He also possesses the skills to fight many beings at once. He was aware of the existence of a different dimension and how to open a portal to it, as well as the dangers of crossing time and space through said portal 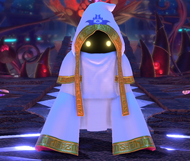 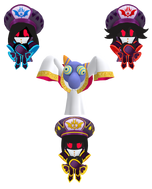 Unhooded Corrupt Hyness render
Add a photo to this gallery