The Hyena-class bomber, often also referred to as the Hyena bomber droid, was a type of variable geometry droid starfighter-bomber manufactured by Baktoid Armor Workshop and whose design was heavily inspired by the Xi Charrian Vulture-class droid starfighter. Introduced some time just before the Battle of Christophsis in 22 BBY, they served with the Confederate Navy throughout the Clone Wars of 22 to 19 BBY. They were often given tasks such as planetary bombardment, destruction of specific holdouts resisting against separatist occupation, anti-capital ship operations against the Republic Navy, even CIS fleet defence and enforcement of planetary blockades. After the end of the Clone Wars and the rise of the Galactic Empire, commandeered and reprogrammed Hyena bombers were used by various rebel factions across the galaxy in their struggles against the empire.

Tier: Low 7-C with laser cannons. High 7-C with cluster bombs. 7-A with missiles/torpedoes. At least High 7-A with proton bombs

Gender: None (unlike most other battle droids, which have masculine programming, the gender of the Hyena bomber’s programming remains unclear)

Powers and Abilities: Superhuman Physical Characteristics, Transformation (can switch between an insectoid “walk patrol” mode and a sleek “flight” mode in an instant), Flight (powerful repulsorlift engines allow them to take flight in an instant), Energy Projection (thanks to directed energy weapons built into their bodies)

Attack Potency: Small Town level with laser cannons (Equipped with the same kind of light starfighter grade laser cannons as the Vulture Droid). Large Town level with cluster bombs (Although never specified, these droid bombers do seem capable of carrying cluster bombs. These bombs are capable of crippling the hulls of something like an AT-AT and armed light freighters). Mountain level with concussion missiles and proton torpedoes (More powerful than the missiles used in the Umbaran long range capital defence turrets, which have yields of 100 Megatons each, and potentially up to 800 Petajoules. Just a few of these can damage the unshielded hulls of capital ships with at least this kind of durability). At least Large Mountain level+ with proton bombs (Can be equipped with anti-capital ship grade proton bombs. These are capable of blasting through the unshielded hull of a Venator-class Star Destroyer, as witnessed during the Battle of Lola Sayu. Furthermore, a single Hyena bomber carrying two to four of these is more than capable of destroying Lessu, the capital city of Ryloth which is built into and around a gigantic mountain)

Speed: Transonic atmospheric speeds (1150+ km/hr). Can accelerate continuously to Sub-Relativistic+ speeds in space (During the Berch Teller campaign’s assault on the Sentinel moon, they proved themselves capable of covering a distance of 200,000 km in mere moments. They are also more than capable of keeping up with the likes of the Eta-2 Actis-class Light Interceptor and ARC-170 Starfighter)

Durability: Large Building level+ (Larger and more durable than the likes of the Vulture Droid. Overall at least as well built and sturdy as the Eta-2 interceptor)

Intelligence: Low. Their droid brains lack any sort of tactical acumen or other higher thinking capacity. Their primary tactic in battle is to simply rush the enemy and attempt to overwhelm them with their speed & agility, sheer numbers, and high rate of fire of their weapons. 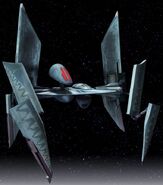 Retrieved from "https://vsbattles.fandom.com/wiki/Hyena-class_Bomber?oldid=5772887"
Community content is available under CC-BY-SA unless otherwise noted.