Hyde is the main protagonist of Under Night In-Birth EXE:Late. He was once a normal high school boy living a normal high school life until one day while returning home late, he was suddenly attacked by a Void. He was fortunate enough to be rescued by Linne, but at the same time was unlucky enough to be bitten by the Void and subsequently awakened his EXS - the EXS of Darkness "Void Red". Linne, seeing that Hyde possessed the legendary sword she had been searching for over a hundred years, the only weapon capable of ending her immortal life thus freeing her of her curse, then along with her giant guardian, Waldstein, decided to live in Hyde's house, to train the boy. She also makes him promise to end her life with his sword one day, which causes Hyde a great amount of stress. One night, for his safety, Linne and Waldstien leave Hyde behind to confront the leader of Amnesia Hilda on their own, and Hyde stubbornly refusing to let them fight alone begins his journey to find them in the 'Night'...as well as settle a personal score with Hilda from their last encounter.

Hyde is straightforward and is very focused on what he sets his mind to. He faces any challenge, no matter how daunting, and does his best to overcome it. In normal circumstances, he is surprisingly cool-headed, talkative, and friendly contrary his thuggish appearance and lack of tact. However, when in combat or serious situation, he becomes noticeably cocky, confrontational, and reckless often getting himself into numerous dangerous situations much to Linne's chagrin; though he can occasionally display a more mature attitude that is capable of seeing the bigger picture. With no interest in obtaining power for himself or goal for himself within the Hollow Night other than to repay his debt to Linne and assists her with her goals and return to his peaceful life, Hyde fights only to protect himself and those he cares for.

Powers and Abilities: Superhuman Physical Characteristics, Darkness Manipulation (Slashes give a wave of darkness and has darkness rings in spinning attacks), Nonexistent Erasure (Insulator rends one's existence or more specifically the "source of all things" with its strikes, working on even Voids, which doesn't exist in the first place); Can kill Immortals (Type 5), Energy Projection (Can various blasts and slashes with Insulator's dark powers), Accelerated Development (Adjusted to his powers extremely quickly, and within a month is capable of fighting toe-to-toe with far more experienced, powerful, and ruthless ability-users and winning), Extrasensory Perception (Can sense beings in his general area as well as those who try to hide their presence with relative ease) Non-Physical Interaction, (Can kill Nonexistent beings; Can kill Voids), Durability Negation (Can break through most conventional types of defenses), Immortality (Type 5), Energy Absorption (Via Insulator drawing in EXS to power it's devastating attacks), Instinctive Reaction (It is noted that Hyde's body moves on its own in combat, causing him to move, attack and dodge without really needing to think), Regeneration (Low; In-Births can naturally heal injuries like minor wounds and paper cuts), Enhanced Senses (In-Births can sense other people, emotions, Voids, sounds, etc), Resistance to Disease Manipulation (In-Births can resist the effects of hollow night which makes normal humans sick), Soul Manipulation (In-Births are able to survive after their soul was bitten by a Void), Paralysis Inducement and Fear Manipulation (In-Births are able to resist Voids who are able to paralyse their opponent and give them fear), Corruption In-Births are able to resist Voids who are able to corrupt others to turn them to Voids passively) and Madness Manipulation (Type 3) (In-Births are able to resist Voids who are able to make a person insane by just looking at them)

Stamina: Very high, shows little signs of tiring in combat (only noticeable times of tiring is shown after using Raging Roar in which he quickly recovers afterward and after his fight with Hilda where he was left only slightly out of breath).

Intelligence: Still in high school, trained by Linne in combat.

Weaknesses: Doesn't have much control over his power and despite his talent is still very much a rookie fighter. Extremely reckless.  Always tries to not kill his opponent or seriously injure them which leads to him constantly holding himself back. Certain attacks he uses with Insulator can easily wear him out 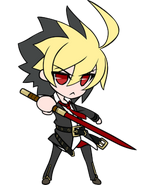