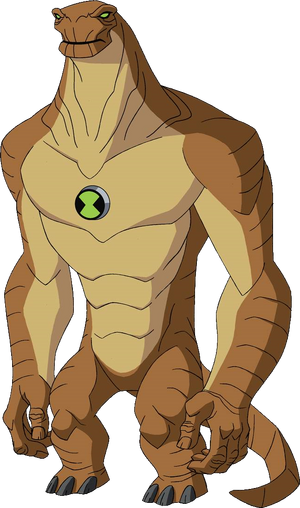 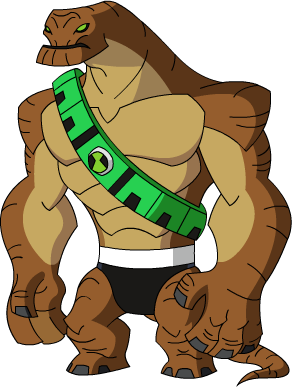 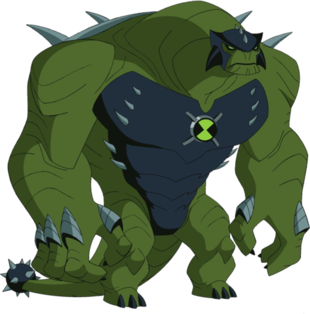 Powers and Abilities: Superhuman Physical Characteristics, Size Manipulation (Can increase his size), Limited Self-Sustenance (Type 1; Stated by Pierce that Humungousaur is strong enough to survive in the vacuum of space for a few minutes), has a powerful roar. Resistance to Fire Manipulation | All previous abilities on a higher scale minus Size Manipulation, Natural Weaponry (Spiked Armor and Mace Tail), Explosion Manipulation (Can turn his arms into missile launchers and fire salvos of missiles)

Lifting Strength: At least Class M (At full size, Humungousaur was stated by WOG to be stronger than Four Arms. He has managed to lift a house and throw it through several other buildings. He also supported the weight of a bridge that supported many vehicles and supported a falling Washington Monument. It has been confirmed that Humungousaur can lift a To'kustar) | At least Class M (Stronger than base form)

Stamina: High (Humungousaur fought the Plumbers' Helpers without tiring out. He also kept fighting Aggregor even when he weakened and he has held his own against Vilgax before)

Weaknesses: Vaxasaurians are very vulnerable to electricity. Their strength also has a clear limit since objects or creatures as heavy as their natural predator, Tyrannopede, has been shown to heavy for them to lift. They can be considered slow and their large size makes them an easy target while also making it hard for them to fit into small spaces.

Start a Discussion Discussions about Humungousaur