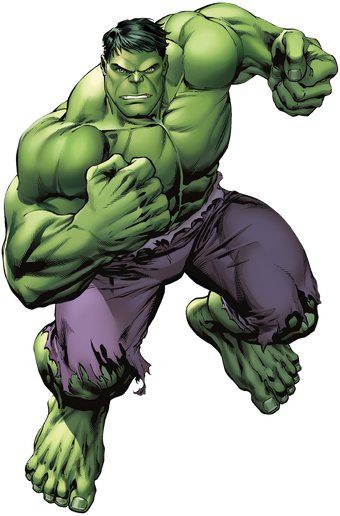 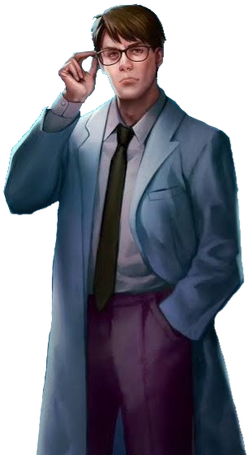 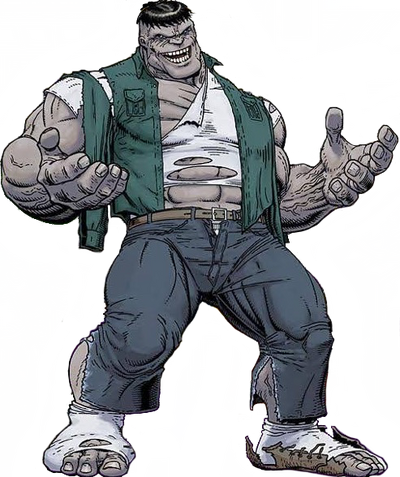 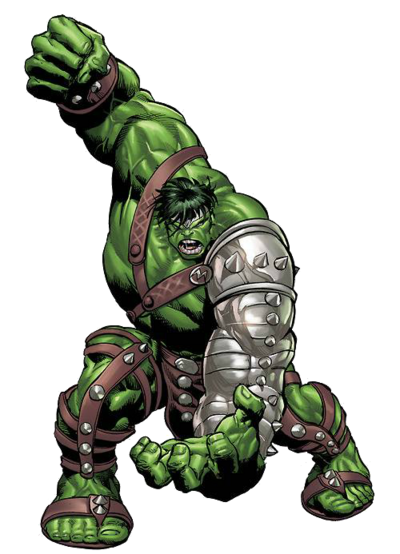 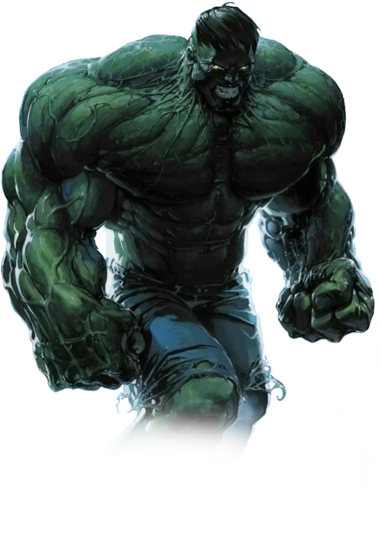 The Hulk is a fictional superhero appearing in American comic books published by Marvel Comics. The character was created by Stan Lee and Jack Kirby and first appeared in The Incredible Hulk #1 (May 1962).

Throughout his comic book appearances, the Hulk is portrayed as a large green humanoid that possesses immense superhuman strength and great invulnerability, attributes that grow more potent the angrier he becomes. Hulk is the alter ego of Bruce Banner, a socially withdrawn and emotionally reserved physicist who physically transforms into the Hulk under emotional stress and other specific circumstances at will or against it; these involuntary transformations lead to many complications in Banner's life. When transformed, the Hulk often acts as a disassociated personality separate from Banner.

Over the decades of Hulk stories, the Hulk has been represented with several personalities based on Hulk and Banner's fractured psyche, ranging from mindless savage to brilliant warrior, and Banner has taken control of the Hulk's form on occasion. Banner first transforms into the Hulk after being caught in the blast of the gamma bomb he invented while saving Rick Jones, a youth who had wandered onto the testing range.

Superhuman Physical Characteristics, Genius Intelligence (Can create incredibly advanced technology), Martial Arts, Hacking (As shown here), Multiple Personalities, Immortality (Types 1 & 4. Will end up in the Below-Place after dying from which he can quickly revive himself through the Green Door should he choose to do so), Enhanced Senses (Can accurately sense temperature and air quality), Extrasensory Perception (Can sense gamma radiation), Transformation, Limited Telekinesis (Hulk broke a glass while Bruce was in control), Preparation (Made the following weaponry while isolated on an island) and Resistance to Possession (As a student of Advanced Mind Control and Hypnosis, prevented Crusher Creel from entering his mind) and Radiation Manipulation. Optional Equipment grants him Technology Manipulation (Using the BannerTech Virus and Gamma Dome. Can also jam radios and satellites), Energy Projection (Using the Calypso Offensive Satellite and certain weaponry), Electricity Manipulation (Using an Old Power Taser), Ice Manipulation and Non-Physical Interaction (Using Bannertech Ice Eight Agent), Explosion Manipulation, Fire Manipulation and Magma Manipulation (With Gamma Island Weaponry), Information Analysis (As shown here, Can scan someone for being an android, Possesses a Gamma Ray Detector), Paralysis Inducement and Limited Biological Manipulation (Possesses a machine which can cause strokes), Summoning (Can access equipment within his lab using Pocket Teleporter), Statistics Amplification (Using forcefields, can amplify his statistics to throw Wolverine), Forcefield Creation (Possesses forcefields around his body which absorb both radiation and old power), Nanotechnology (Can use Bannertech Nanoparticles which disable all firearms and perform repairs), Illusion Creation (Made a hologram to mimic Galactus), Gravity Manipulation (By using BannerTech Molecular Repulsion), Teleportation (By using the BannerTech teleporter), Time Travel and Light Manipulation (By using the T-Gun) and Limited Healing (Constructed a Catalytic Converter which can neutralize carcinogens.)

Superhuman Physical Characteristics, Self-Sustenance (Type 1), Immortality (Types 1, 3 & 4. Will end up in the Below-Place after dying from which he can quickly revive himself through the Green Door should he choose to do so), Regeneration (High-Mid for practical combat purposes, Mid-High over time. Very quickly reassembled himself at will after being cut into many pieces. His future self, the Maestro, took several years to recover after being reduced to powder), Resurrection via Green Door, Multiple Personalities (Became able to switch between his personas and they can work together to be "the strongest and smartest one there is"), Enhanced Senses & Extrasensory Perception via Mystic senses (He can perceive spirits and can know if he's being watched as well as feel, hear, and see them.), Berserk Mode and Rage Power (His strength and general power levels are directly proportional to his anger, or, as the old saying goes, "The madder Hulk gets, the stronger Hulk gets"), Can create massive shock waves with thunderclaps, Absorption (Can absorb gamma radiation. Can absorb dark magic and dimensional nexus energies to grow stronger), Adaptation (His body has adapted to breathing underwater), Non-Physical Interaction (Can touch energy as if it were solid and tangible), Information Analysis (Can discern how magical objects work), Reactive Evolution and Self-Power Modification (Gained the ability to see ghosts because he was afraid of his father coming back to haunt him. His powers are directly affected by his psyche. All of his powers are manifestations of his psyche with the Gray, Green, and Normal forms being representative of his ID, Superego, and Ego respectively. Gamma Rays bring out subconscious desires as powers which dictate their capabilities), Telekinesis (Once developed telekinesis), Power Nullification and Resistance Negation (His radiation negates invulnerability, including invulnerability to Mind Manipulation), Limited Radiation Manipulation (Can release massive bursts of gamma radiation capable of leveling cities, involuntarily, when enraged.)

Same as before, with Immortality (Type 2), Extrasensory Perception (Can see the naked souls of men and smell the lies in their hearts hidden even from themselves), Absorption (Can absorb Gamma Radiation at will), Body Control (Can move his disconnected body parts), Resistance to Illusion Creation (Noticed that he and Hawkeye weren't in a real hospital) and Fear Manipulation (Nightmare was unable to make him afraid with his powers.)

Attack Potency: Small Building level (Can damage the likes of Pyro, the Leader and Bushwhacker. Knocked a military plane door off its hinges). Large Planet level with certain weapons (Can damage Skaar and Wolverine. Destroyed Doombots. Constructed an armor and gloves that can trade hits with the Hulk) | Large Planet level (Destroyed an asteroid twice the size of Earth) | Varies (His strength is heavily dependent on his anger and Bruce Banner's willingness to cause harm), usually Large Planet level (Comparable to The Thing and the Blob), up to Solar System level (His peak has consistently been portrayed as comparable to Thor, and empowered a force field that temporarily halted the Celestial Exitar, who was much larger than the Earth) | Solar System level (More powerful than he has ever been as Savage Hulk. Stalemated a serious Sentry) | Varies (While Devil Hulk has more control over Banner and thus is more brutal and stronger than Savage Hulk, he still is restricted by Bruce Banner's and his own moral code), usually Large Planet level (Overpowered Thor on earth, along with Hulkbuster Iron Man. Overpowered the Thing immensely), up to Solar System level

Lifting Strength: Likely Average Human | Class M (Can lift pyramids) | Stellar. Increases exponentially with rage (Capable of supporting the weight of a star, holding tectonic plates together, lifting and throwing mountains, pushed a 10x stronger than normal warrior's madness Thor towards the ground with one arm, separated spheres of matter and anti-matter, etc.) | At least Stellar | At least Stellar

Durability: Small Building level, Solar System level with forcefields (Can withstand hits from Skaar and the Juggernaut, unaffected by attacks from the Red Hulk and Red She-Hulk, blocked a sword hit from Doctor Doom which had previously pierced Worldbreaker Hulk) | Large Planet level | Varies, usually Large Planet level, up to Solar System level (Among other things, he has withstood magical energy measured as 100 times stronger than Hercules' most powerful blows). Regeneration makes him extremely difficult to kill, as his healing factor was once depicted as powerful enough to bring his future "Maestro" self back to life from being reduced to powder. | Solar System level (Endured numerous blows from The Sentry) | Varies, usually Large Planet level (Endured multiple blows from Hulkbuster Iron Man and Thor with little to no effect), up to Solar System level

Stamina: Extremely High (As long as he remains angry)

Range: Extended melee range due to his size, thunderclaps can reach up to Kilometers in every direction, by attacking the ground he can reach potential Planetary range

Intelligence: Average as the Grey Hulk, Joe Fixit. He was a capable mob enforcer. Below Average as the Green Hulk. Not very bright but capable of surprisingly clever battle tactics. At least Average as World War Hulk. He learned how to control his rage with the help of Hiroim, and had some experience as a leader. At least Above Average as Devil Hulk. He holds the ability to analyze situations and reach conclusions and solutions successfully using "unreason and magical thinking". Extraordinary Genius as Banner. He is one of the most brilliant scientists on the Marvel Earth, rivaling the likes of Tony Stark. Banner is also recognized as the premier expert on radiation. Claimed to be one of the eight smartest people on Earth. When in an intelligent state of mind, he is proficient in martial arts, due to training from Iron Fist. Doctor Doom has stated that Banner is superior to him in some fields.

Standard Tactics: Despite his primal exterior, Dr. Banner is still able to control Hulk's actions to some extent, as such Hulk will not kill his opponents or use excessive force if he doesn't require it.

Weaknesses: If he is not sufficiently enraged, he transforms back to Bruce Banner, with only base human stats (although he has shown the ability to maintain the transformation in varying emotional states), and can be knocked out depending on the circumstances. In his Grey and Immortal Hulk incarnations, he reverts to human form when exposed to bright day sunlight. His powers are heavily tied to his psyche, and as such are subject to change. For example, a fear of harming others as the intelligent Hulk made it so that he decreased in power with anger for some time. His powers also at one point became only usable at night due to his subconscious fear of exposure and the judgment of others. As Devil Hulk, he prevents himself fron getting too enraged to not lose control, becoming the Savage Hulk if he gets too angry as a safety mechanism, which decreases his strength. He's repelled by things related to the The One Above All Others

Retrieved from "https://vsbattles.fandom.com/wiki/Hulk_(Marvel_Comics)?oldid=7017338"
Community content is available under CC-BY-SA unless otherwise noted.