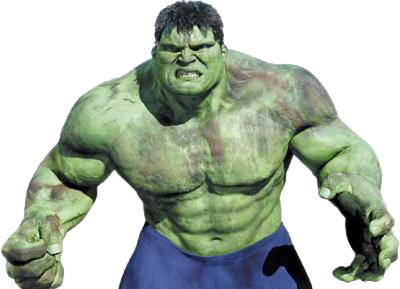 Hulk is the form taken by Bruce Banner whenever he is stressed or enraged. This is due to exposure to gamma radiation coupled with childhood trauma. His father David Banner is a geneticist who experiments on himself in his efforts to improve human DNA. His modified genes are passed on to his son, Bruce. Eventually one of his experiments exploded, killing Bruce's mother. David was arrested and Bruce was raised in foster care, with no memory of his true parents.

As an adult, an accident in the lab leads to a radiation bath which interacts unexpectedly with Bruce's altered DNA. Soon after he becomes the Hulk, and destroys the lab. He is captured by the military but easily escaped. His father, now entirely crazy, bites an electrical cord and fought the Hulk. Ross deploys a bomb, and both are assumed dead. However, he is actually still alive deep in the Amazon forests.

Attack Potency: Small Building level (Can create a shockwave by slamming the ground), higher with rage (Broke out of foam meant to hold him) | At least Small Building level, possibly higher (Effortlessly threw a tank 420 meters away) | Town level (Unfroze Pear Lake in almost an instant)

Speed: Unknown | Subsonic running speed (Ran through a desert at high speeds that could reach up to 300 miles per hour and has outran 2 helicopters) with Supersonic combat speed and reactions (Can react to missiles and attacks from tanks, albeit over-time. Deflected missiles from helicopters) | Same as before

Striking Strength: Small Building Class (Can exert a pressure of 14 tons per square-inch. He also punched a Gamma Dog [Which is bigger than a regular dog] so hard that it flew several feet), higher with rage | At least Small Building Class, possibly higher | Town Class

Stamina: Superhuman (Hulk's endurance is far above any regular human, and he can perform physical activities without tiring. At the climax of the film, he escaped an underground base, traveled the desert while attacked by the military until he reached San Francisco)

Intelligence: Genius as Bruce Banner (Is a geneticist like his father). Below Average as the Hulk.

Weaknesses: Slightly vulnerable to sharp objects, can have the gamma drained from him, reverting him to his human form.

Smallest and biggest Hulk models
Add a photo to this gallery