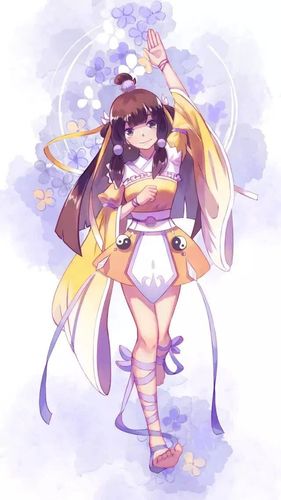 Hou Xiaomei is a member of the River Defying Sect, and one of Bai Xiaochun's first friends (and later something more) within the cultivation world.

Powers and Abilities: Superhuman Physical Characteristics, Qi Manipulation and Absorption, Non-Physical Interaction, Aura (Can intimidate those much weaker), Enhanced Senses/Extrasensory Perception (Can see more colors than humans can, and has senses enchanted far beyond humanly possible. Can see souls and sense invisible people and qi [A type of energy, it has several types, including blood, ghost, sword, martial, heavenly, earthly, and several more]. Can sometimes feel a "profound sense of danger" when a dangerous situation is about to befall her regardless of there being no giveaway. Can extend her senses with divine sense, allowing her to feel a certain remote area as if he were there personally). Can ignore conventional durability in a number of ways. Can resist Possession with Divine Sense, Soul, Cultivation base, etc. | All previous to a heightened extent, Power Nullification, Adaptation (Can build up resistances to almost any material as long as injected long enough), Sound Manipulation (Comparable to people that can create earthquakes, reduce enemies to a haze of blood, and even seal the powers of others through their voice), Flight | All previous, Fusionism of her will with heaven and earth granting Energy Absorption from environment. Can defuse others from, and make them unable to absorb energy from heaven and earth, likely has most of Gongsun Wan'er powers to a lesser extent, including: Astral Projection, Duplication (A cut off part of her body would likely become a banesoul, though much weaker than she herself is), Invisibility and Stealth Mastery (impossible to see or feel even to Devas' extrasensory perception), Aura that causes uncontrollable fear, Death Manipulation, Necromancy, Ice Manipulation/Sealing that affects souls and bypasses resistance, Absorption (Of souls, mind, bodies, energy, powers, death and life and someone's very existence. Can bypass resistances to an extent. She normally only absorbs blood and life energy at once as a soul bane unless the enemy is already a carcass), Possession, Avatar Creation, Longevity, Regeneration (Low-Godly), Resistance (To Poison Manipulation, Death Manipulation, Mind Manipulation, Body Puppetry, Power Nullification, Information Analysis, Sealing, Soul Manipulation, Transmutation and Absorption) | All previous to an extremely higher extent

Attack Potency: At most City level (Slightly inferior but comparable to Wang Lin) | Island level (Weaker than Core Bai Xiaochun, but somewhat comparable) | Multi-Continent level (As a deva, she is superior to the dead Blood Ancestor) | Unknown, at least Large Star level (Spent several millennia under the tutelage of Gongsun Wan'er, and should at least be superior to demigods on the level of Deva Bai Xiaochun)

Standard Equipment: Spirit Stones (A form of currency, can also be used to recover energy)

Intelligence: Smart, but somewhat naive | Much less naive, though she can be too trusting with friends | Smart, has had centuries worth of training | Smart, lived for so long that a simple argument can last for a millennia