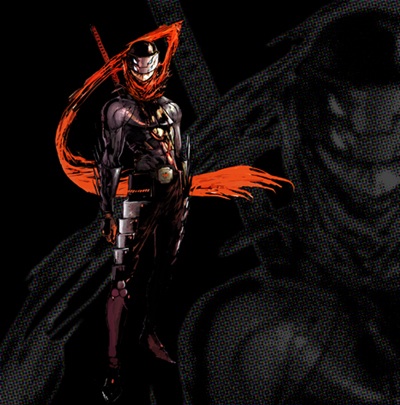 Hotsuma is the main protagonist of the Shinobi (2002) video game. A master shinobi and leader of the Oboro Clan. After his clan was slain and resurrected by an evil sorcerer named Hiruko who released hellspawn across Tokyo, Hotsuma goes on a journey for revenge against Hiruko and to save the world.

Powers and Abilities: Superhuman Physical Characteristics, Martial Arts, Stealth Mastery, Weapon Mastery, Fire Manipulation, Statistics Amplification and Intangibility (Able to boost his speed and become Intangibile for a brief moment), Surface Scaling, Electricity Manipulation (Able to add electricity to his physical strikes and weapons), Status Effect Inducement (His electric kunai paralyze those hit by them), Afterimage Creation | All previous abilities, Soul Absorption (His sword Akujiki absorbs the soul of those slain by it and grows in power with each consumed, Akujiki can slowly absorb the soul of anyone touching it), Statistics Amplification (Akujiki's power vastly increases with each enemy killed by it in rapid succession), Flight (Akujiki has a will of it's own and can levitate and fly through the air), Pain Manipulation (Akujiki can cause pain to those it has cut, even if the wounds they sustained from it have healed), Possession (Akujiki can take control a person's body and force them to hold onto it, allowing it to slowly absorb their soul), Soul Manipulation (Akujiki can merge all the souls it has absorbed into one)

Attack Potency: At least Small Building level (Even before Akujiki's power was awakened, Hotsuma could easily split Tanks in half) | At least Small Building level Physically, Small City level with Akujiki (After awakening Akujiki's power, it absorb the souls of dozens of hellspawn and Oboro Clan members. Defeated Hiruko Ubusuna who in a much weaker, old state created a storm cloud across Tokyo, Akujiki absorbed Hiruko's soul which was made up of countless souls making it far more powerful)

Stamina: High (Faced hordes of hellspawn and his own clan members and defeated them all without rest or showing any signs of fatigue)

Intelligence: Above Average (Hotsuma is a master ninja, training his entire life to become head of his clan)

Weaknesses: None | Akujiki will start to feed of his soul if he doesn't fill the blades apatite.