For detailed information about this franchise, visit the Hotel Transylvania Wiki. 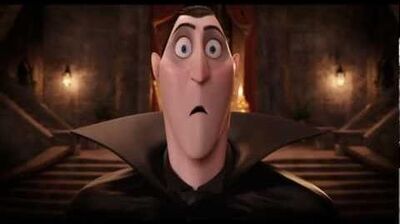 The film tells the story of Count Dracula, the owner of a hotel called Hotel Transylvania where the world's monsters can take a rest from human civilization. Dracula invites some of the most famous monsters to celebrate the 118th birthday of his daughter Mavis (with an 18 year old aspect). When the "human-free hotel" is unexpectedly visited by an ordinary 21-year-old traveler named Jonathan, Drac must do everything in his power to prevent Mavis from falling in love with him before the hotel's guests learn a human is in the castle, which may jeopardize the hotel's future and his career.

The film was released on September 28, 2012 by Sony Pictures Releasing, and was met with mixed critical reception, while the general public received it favorably, with many of them and some critics praising the colorful cartoony animation, humor and voice acting, while criticizing the predictable story and writing. It earned a total of $358 million worldwide, against a budget of $85 million, at the box office, and was nominated for a Golden Globe Award for Best Animated Feature Film. It launched a franchise with a sequel titled Hotel Transylvania 2, which takes place seven years after the first film, released in 2015, and a third film titled Hotel Transylvania 3: Summer Vacation released in 2018. A television series based on the film premiered on Disney Channel in June 2017, focusing on the teenage years of Mavis and her friends at the Hotel Transylvania. A fourth film is set to be released on December 21, 2021.

Count Dracula
Add a photo to this gallery

Retrieved from "https://vsbattles.fandom.com/wiki/Hotel_Transylvania_(Verse)?oldid=7007416"
Community content is available under CC-BY-SA unless otherwise noted.