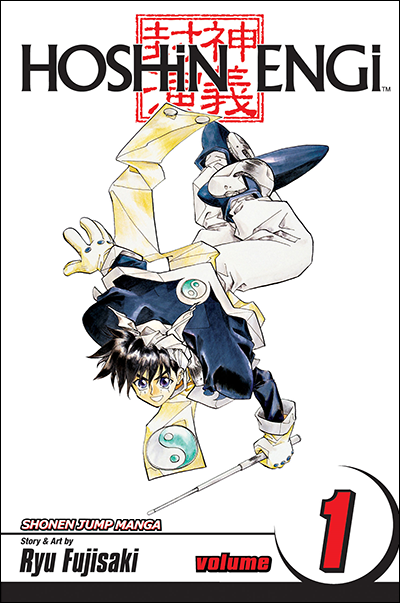 Hoshin Engi (Japanese: 封神演義 Hepburn: Hōshin Engi?), also known as Soul Hunter, is a Japanese manga series by Ryu Fujisaki. Hoshin Engiwas inspired by the Chinese literary classic Fengshen Yanyi, a shenmonovel (in fact, Houshin Engi is just the Japanese pronunciation of it). The story involves the Chinese mythology and history of China, in particular, the last members of the In (Yin Dynasty aka Shang Dynasty) and the plot to overthrow them. It takes place in Ancient China, although there are fantasy and sci-fi elements involved. The main character is Taikoubou, a doushi (sennin in training, sennin and doushi have different bones from normal humans which allows them to use paopei and have supernatural powers). He appears as a teenager, even though he's actually 72 years old at the start of the manga. He's also perhaps one of the best strategist (Strategy and Tactics are different things) of all manga protagonists.

The manga series was serialized in Weekly Shōnen Jump magazine from 1996–2000 and compiled in 23 tankōbon volumes by Shueisha. VIZ Media acquired the rights to the manga, with bimonthly releases starting June 5, 2007. Also of note is that the manga has been re-released and re-compiled into fewer larger volumes with new cover art, illustrations and afterwords. The 18 Kanzenban volumes were released periodically between July 2005 and June 2006 in Japan only.

The story has been adapted into an anime series titled Senkai-den Hōshin Engi, broadcast on Japanese TV in 1999 and released in North America on DVD as Soul Hunter in 2001. The anime is 26 episodes in length. In January 2009, Shomei TV announced their intentions to remake the anime series if they received 10,000 signatures. Although the 10,000 signatures were reached, there's been no word about the remake as of April 2011.

Characters from the series appear in Jump Ultimate Stars. The plot and characters are described, below, using in-universe tone.

Hoshin Engi is considered to be extremely broken. As a verse, they are above the likes of Yu Yu Hakusho, Negima and Busou Renkin. The real strength of this verse comes from the sheer number of broken abilities it has. In fact, verses which can rival the brokenness of this verse, are the likes of Jojo's Bizarre Adventure. What's more, one of the main characters, Youzen, has an ability that lets him transform his body into nearly anything, even mimicking his opponents' powers, physical stats, and weapons. He can even transform into multiple parts of different people at once. However, he can't transform into people stronger than himself. That means that at the end of the manga, he has the powers of nearly everyone in the series.

As far as destructive showings go the characters can range from city level to multi-continent level.

The verse supposedly didn't have any solid speed feats before, nor it was thought to have any to begin with. Here are some recent examples of the most impressive speed feats that the verse has. The Kinben is currently sitting around hypersonic+/massively hypersonic movement speed, Suupuushan flies at double-digit Mach speed and Raikouben can attack at the speed of lightning.