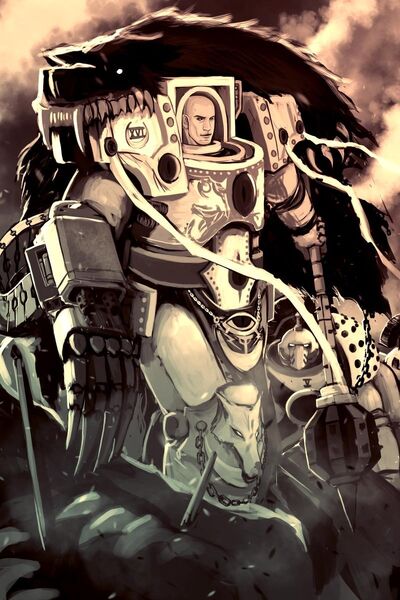 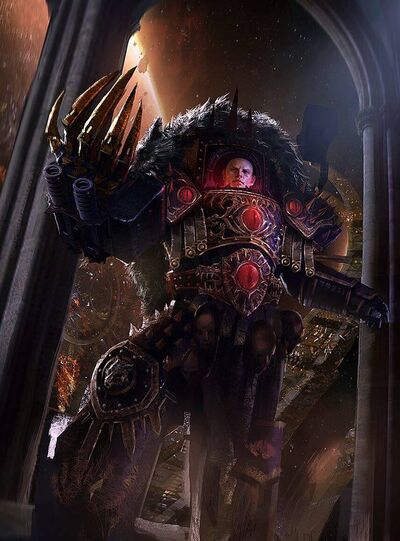 "It is the folly of men to believe that they are great players on the stage of history, that their actions might affect the grand procession that is the passage of time. It is an insulating conceit a powerful man might clasp tight to his bosom that he might sleep away the night, safe in the knowledge that, but for his presence, the world would not turn, the mountains would crumble and the seas dry up. But if the remembrance of history has taught us anything, it is that, in time, all things will pass. Unnumbered civilisations before ours are naught but dust and bones, and the greatest heroes of their age are forgotten legends. No man lives forever and even as memory fades, so too will any remembrance of him.
It is a universal truth and an unavoidable law that cannot be denied, despite the protestations of the vain, the arrogant and the tyrannical.
Horus was the exception."
‐ Kyril Sindermann, Preface to the Remembrancers

"It would take a thousand cliches to describe the Warmaster, each one truer than the last."
‐ Petronella Vivar, Palatina Majoria of House Carpinus

Horus Lupercal, also known more simply as the Lupercal during his lifetime by the Astartes of his Luna Wolves Legion, was one of the 20 genetically-engineered Space Marine Primarchs created by the Emperor of Mankind from the foundation of his own DNA before the start of the Great Crusade to lead the armies of the newborn Imperium of Man. Horus was the Primarch of the Luna Wolves Legion of Space Marines (later renamed the Sons of Horus), the first Imperial Warmaster, the most favoured son of the Emperor of Mankind, and ultimately, the greatest Traitor in the history of Mankind. Horus' homeworld was the Hive World of Cthonia which lay only a few light years from Terra. Horus was thus the first Primarch to be rediscovered by the Emperor after the Great Crusade began in the early 31st Millennium. Horus was responsible for unleashing the horrific 7-year-long civil war known as the Horus Heresy upon the Imperium of Man in the early 31st Millennium which killed billions of men, women, and children in pursuit of his mad ambition to overthrow the Emperor of Mankind and replace him as the ruler of the human race. While Horus ultimately lost his bid for power and was slain by the father he had once so loved during the Battle of Terra, his actions damaged the Imperium of Man beyond repair and inaugurated the current Age of the Imperium, when Mankind is beset by countless horrific dangers to its existence and the Imperium itself has become a stagnant, repressive, intolerant and dehumanising galactic presence.

Age: At least several centuries by the time of his death

Classification: Primarch of the Luna Wolves/Sons of Horus Space Marines, Warmaster of the Imperium | Chosen Champion of Chaos Undivided, Warmaster of Chaos

Superhuman Physical Characteristics, Enhanced Senses, Immortality (Types 1 and 3), Regeneration (Low-Mid), Self-Sustenance (Type 1, 2 and 3; Should be comparable to Custodes), Information Analysis (Can accurately analyze any chemical he eats/tastes and break them down if required), Limited Memory Manipulation (Can eat creatures/people and absorb part of their memories from their DNA/RNA), Weapon Mastery (Skilled in a wide variety of weaponry to an extent far greater than what could ever be achievable by a regular human), Technology Manipulation (His skin can directly connect and interface with his armor, among several other pieces of Astartes equipment), Martial Arts (As a Primarch, Horus is one of the best close-quarters fighters in the entire galaxy), Vehicular Mastery (Even among his brothers, the Khan was likely the most skilled bike rider in the entire Imperium), Matter Manipulation (Via Power weapons), Genius Intelligence, Forcefield Creation (Via Iron Halo), Durability Negation (Power weapons break down the physical bonds of matter), Teleportation via Dimensional Travel, Mind Manipulation, Soul Manipulation and Conceptual Manipulation (Primarchs are capable of attacking on every level of existence, mental, spiritual and even conceptual), Aura (Primarchs are said to contain an overwhelming aura that completely baffles regular humans, as well as sometimes Astartes. Their presence in the Warp is so powerful and influencing that Magnus reduced several Remembrancers to tears over his seeming divinity, while Russ could make Ahzek Ahriman himself kneel before him with his sheer presence), Resistance to Magic, Telepathy, Mind Manipulation, Empathic Manipulation, Soul Manipulation, Spatial Manipulation, Time Manipulation, Matter Manipulation, Reality Warping, Existence Erasure, Aura, Conceptual Manipulation (Resistant to all the myriad of different attacks that can be made on him by the powers of the Warp, as well as most of the powers of other Primarchs), Disease Manipulation, Poison Manipulation (Astartes are practically immune to all diseases and poisons, and their Primarchs should logically be even tougher), Corruption, Radiation Manipulation (Should almost be entirely immune to the effects of radiation exposure, thanks both to his Power Armor and enhanced physiology), Heat Manipulation (Astartes are incredibly resistant towards extremes of hot and cold, and logically their Primarchs should be far superior), Pain Manipulation (Astartes possess the physiology and mental training to shrug off debilitating injuries, and their Primarchs should easily scale)

All previous abilities and resistances vastly improved by the blessings of the Chaos Gods, along with Spatial Manipulation (Intervened with the Emperor's teleportation and separated the two Primarchs from him), Energy Manipulation, Reality Warping, Power Nullification, Immortality (Type 4; it is implied that had it not been for the Emperor destroying his soul, Horus would've merely been brought by the Chaos Gods, albeit how and when is left unknown)

Attack Potency: Solar System level (One of, if not the strongest fighters among all the Primarchs. Comparable if not outright superior to Sanguinius, and Leman Russ himself was wary of fighting him despite believing a win to be possible) | At least Solar System level (Far stronger than he was before, murdered Sanguinius with little effort, and crippled Leman Russ with a single, casual blow. Much greater in power than beings such as Teturact, who could warp an entire solar system, including the space between planets, and beyond with his influence), likely far higher (While the Emperor was initially holding back due to not wishing to fight his favored son, Horus still broke through his defenses and managed to beat the Emperor to near death, crippling him and forcing him to be put on permanent life support on the Golden Throne)

Lifting Strength: At least Class T (Should be comparable to Angron in this regard, who can force his way out from under a collapsed mountain) | At least Class T, likely higher with psychic amps

Durability: Solar System level | At least Solar System level, likely far higher (Took many hits from the Emperor, was only killed when his father fired an extremely potent psychic attack right through him). Protection from the Chaos Gods provides many extra degrees of defense

Intelligence: Extraordinary Genius (One of the most brilliant military strategists in the history of the Imperium. Considered the prime candidate for taking his father's mantle in leading the Great Crusade, alongside Sanguinius. While his brothers all had their own areas of expertise, Horus was considered a "jack of all trades" in leading his Legion, albeit far from master of none. Furthermore, Horus was an extremely charismatic leader and among the few men capable of getting along with all of his brothers. The Primarchs were also all engineered from birth to be the greatest military minds in human history, with extremely few people existing that could match up to their individual intellect)