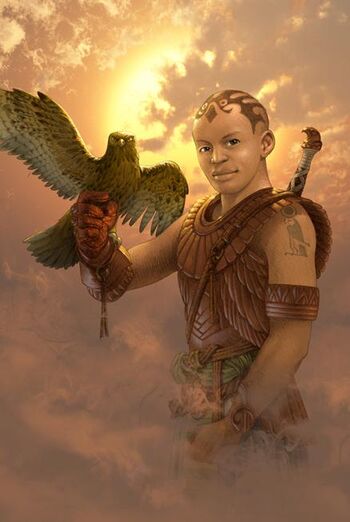 Horus is the Egyptian God of War and Falcons and is destined to avenge his father's death at the hands of Set. After being released from the Duat, Horus took Carter Kane as his host and aided him in the war against Apophis, later becoming the Pharoah of the Gods after the serpent's defeat.

Tier: 6-A normally, possibly High 6-A at full power

Classification:, God of Falcons and Hunting, God of the Sky, God of War, Patron of the Pharaohs, King of the Gods

Attack Potency: Continent level normally (Even in a human host he was able to fight Set with the Red Pyramid), Multi-Continent level at full power (Horus, Osiris and Set are the three most powerful gods of the Egyptian Pantheon after Apophis and Ra, Horus' and Set's ultimate battle was thought to have "destroyed the world")

Standard Equipment: His Khopesh sword and a javelin, Ra's Crook and Flail

Intelligence: As the Egyptian God of War, Horus is a master of all forms of combat known to the Egyptians all the way up through the modern age, with Carter describing Horus' movements as "perfect" to the point that fighting is less of a conflict and more of a pastime for the god. His ingrained battle instincts allow him to guess the approximate time to sunrise as well as a means to counter nearly any martial technique used against him. In addition, he is a powerful wielder of combat magic, which manifests in his incredibly potent hawk warrior persona, being the most respected of all the Egyptian gods in its usage, leading some to wish that Horus led the pantheon instead of Ra. However, Horus' skill has left him complacent, arrogant, and narcissistic, rarely caring for a strategy outside of simply beating his foes into submission and possessing the hubris to believe that he alone could defeat Apophis in spite of the prophecy and his prior experience in battling the serpent of chaos. In addition, his knowledge of magic outside of direct combat is limited, and thus he can be caught off guard fairly easily.

Weaknesses: Horus is complacent, arrogant, and narcissistic. As an Egyptian God, he can be banished deep into the Duat through death or sufficiently powerful magical items. Horus needs a host to appear in the mortal world for any significant length of time and can be destroyed permanently if a magician casts an execration spell on his sheut. His connection to the mortal world becomes weak whenever he is crossing a moving body of water.